Unsplash/Neil Bates
A young man travelling through the Swiss Alps by train during pandemic times.

Although COVID-19 deaths have decreased across the world, numbers could rise as northern countries head into winter, senior officials from UN health agency WHO have warned.

Speaking on Wednesday, WHO chief Tedros Adhanom Ghebreyesus again beat the drum for vaccination to reduce spread of the disease.

"Even if you are vaccinated, there are simple things you can do to reduce your own risk of infection, and to reduce the risk of infecting someone else.Avoid crowds if you can, especially indoors. If you are in a crowded indoor space, wear a 😷 and open a 🪟"-@DrTedros pic.twitter.com/UgHjIjqP7D

He urged people to get the jab or, if they are already vaccinated, to get further boosters.

“We are now seeing a welcome decline in reported deaths globally. However, with colder weather approaching in the northern hemisphere, it’s reasonable to expect an increase in hospitalizations and deaths in the coming months,” said Tedros, speaking during his regular briefing from Geneva.

Vaccination coverage among the most at-risk groups - such as health workers and older persons - also remains too low, he added, especially in poorer countries.

Tedros reminded people everywhere to continue to take action to reduce the risk of infection - even if already vaccinated. Steps include avoiding crowds, especially indoors, and wearing a mask.

“Living with COVID-19 doesn’t mean pretending the pandemic is over. If you go walking in the rain without an umbrella, pretending it’s not raining won’t help you. You’ll still get wet.  Likewise, pretending a deadly virus is not circulating is a huge risk,” he said.

Worldwide, nearly 600 million cases of COVID-19 have been recorded, some 2.5 years into the pandemic.

Europe is projected to reach 250 million cases in a matter of weeks, said Dr. Hans Kluge, Director of WHO’s Office for the region.  Like Tedros, he also anticipates the winter “surge” in cases.

“We have made great strides in addressing the pandemic. But the virus is still circulating widely, still putting people in hospital, still causing too many preventable deaths – some 3,000 in the past week alone, about a third of the global recorded total,” said Dr. Kluge in a statement on Tuesday.

© WHO/Khaled Mostafa
A doctor looks at an image of a monkeypox lesion on his computer screen at a sexual health clinic in Lisbon, Portugal.

Europe is also home to around a third of the global caseload for the continuing Monkeypox outbreak, with 22,000 confirmed cases across 43 countries.

The Americas account for more than half of all reported cases, with several countries continuing to see a rise in infections.

WHO noted that some European countries, including Germany and the Netherlands, are also seeing a clear decline in infections.

This development demonstrates the effectiveness of public health interventions and community engagement to track infections and prevent transmission, said the agency.

As virus spreads ‘freely’ COVID-19 ‘nowhere near over’: Tedros 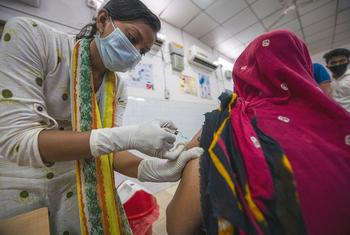 There have been one million COVID-19 deaths so far this year – a “tragic milestone” that must lead to more people being vaccinated against the disease, World Health Organization (WHO) chief Tedros Adhanom Ghebreyesus reported on Thursday.