IOM 2021/Paula Bonstein
More than half of the population within Afghanistan depend on humanitarian assistance, and their human rights remain challenged.

Humanitarians have stayed and delivered in Afghanistan in the year since the Taliban takeover, and it is imperative that the international community continues to do the same while the de facto authorities must also do their part, the Security Council heard on Monday.

#Afghanistan is more than a humanitarian crisis. But it is not a hopeless crisis.Preserving basic service delivery alongside humanitarian assistance remains the only way to prevent a catastrophe even greater than what we have seen in the past year.My remarks:

Although conflict, poverty, climate shocks and food insecurity have long been a “sad reality” for Afghanistan, Mr. Griffiths outlined why the current situation is so critical.

Firstly, large-scale development assistance has been halted for a year in a country that was already facing severe levels of food insecurity and malnutrition, which have only deteriorated.

Humanitarians are also confronting an “exceptionally challenging” operating environment, he added, as engaging with the de facto authorities is “labour intensive”.

Furthermore, there is no confidence in the domestic banking sector which has sparked a liquidity crisis, that has affected aid delivery. A Humanitarian Exchange Facility intended to partially alleviate the liquidity crisis, is still being negotiated with Taliban leaders.

Meanwhile women and girls “have been pushed to the sidelines”, Mr. Griffiths added. Rights gains have been reversed, and adolescent girls have not attended school in a year.

“In the 21st century, we should not need to explain why girls’ education and women’s empowerment are important to them, to their communities, to their countries, and indeed to all of us,” he said.

The UN relief chief stressed that preserving basic service delivery alongside humanitarian assistance “remains the only way to prevent a catastrophe even greater than what we have seen these many months.”

He reported that poverty is still deepening, the population continues to grow, and the de facto authorities have no budget to invest in their own future, making it clear that “some development support needs to be restarted”.

A $4.4 billion Humanitarian Response Plan for Afghanistan currently has a gap of $3.14 billion, he said.

With winter approaching, more than $600 million is urgently needed to support priority preparedness activities, such as upgrades and repairs to shelters, as well as provision of warm clothes and blankets.

Additionally, $154 million is needed to pre-position supplies, including food and livelihood assistance, before the winter weather cuts off access to some areas of the country.

“The people of Afghanistan are still there. They have shown incredible resilience over the decades and in this last year. Our task is to help them to prosper, to flourish and to be safe,” said Mr. Griffiths, who also called for action by the de facto authorities.

Markus Potzel, the Secretary-General’s Acting Special Representative for Afghanistan, reported on the UN’s ongoing engagement with the de facto authorities, as well as efforts towards promoting inclusive governance, rights and freedoms.

He said the Taliban have been “ambiguous” as to the extent to which they want to engage, predicated on being in accordance with their interpretation of Sharia law.

Mr. Potzel underlined the vital need to move “beyond an exchange of hardened positions” towards a sustained dialogue between the Taliban, other Afghan stakeholders, the wider region and the international community.

“Such dialogue must place the interests of all Afghans at its centre," he advised.  "The future stability of Afghanistan rests on meeting the needs of the Afghan people, preserving their rights, and reflecting the country’s diversity in all governance structures." 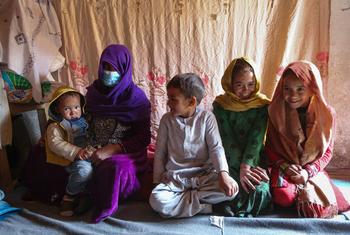 On Thursday, UNHCR, the UN refugee agency, warned of the danger faced by Afghan refugees who continue to be detained and deported from Tajikistan, reiterating that it’s illegal to force those fleeing persecution back to their homeland.