During a raid last week, the Israeli army broke into and shut down the offices of seven Palestinian human rights and humanitarian groups operating in Ramallah, located in the Occupied Palestinian Territory (OPT).

“These actions amount to severe suppression of human rights defenders and are illegal and unacceptable,” the experts said, encouraging UN Member States to use international law to end the abuses.

This followed Israel’s earlier characterization of those organizations as “terrorist” and “unlawful”.

“These designations and declarations are illegitimate and unjustifiable and no concrete and credible evidence substantiating Israel’s allegations has ever been provided,” said the experts, echoing observations that they had made in April.

On 18 and 21 August, Israeli security service Shin Bet interrogated the directors of the Union of Palestinian Women’s Committees, Al-Haq and Defence for Children-Palestine – three of the seven shuttered organizations.

The experts were particularly concerned over alleged threats made by Shin Bet against the organizations, including a public statement regarding Al-Haq’s director, Shawan Jabarin.

They upheld that Israel’s actions have resulted in “serious infringements” on the rights to freedom of association, opinion and expression as well as to participate in public and cultural affairs, “which Israel is fully obliged to fulfill, respect and protect”.

“Civil society is what is left to the Palestinians for their minimum protection,” the maintained UN experts, adding that “shrinking this vital space and resource is illegal and immoral”.

They reminded that information presented by Israel to justify its decision to blacklist human rights groups as terror organizations had failed to convince donor governments and international organizations.

Moreover, the experts noted that a review of Al Haq by the Anti-Fraud Office of the European Union (EU) confirmed that “no suspicions of irregularities and/or fraud affecting EU funds” had been found.

The independent experts called on the EU, the five permanent Security Council members, and all UN Member States to take concrete measures to protect the Palestinian organizations and staff whose offices were raided and closed.

“Such protection depends on Israel revoking once and for all its designations and declarations of these organizations as ‘terrorist’ and ‘unlawful,’” they said.

“The EU and its member States in particular, must urgently use their leverage to stop these aggressive attacks on civil society, in line with their commitments and obligations to protect human rights defenders and civic space”.

The experts concluded by pointing out that “once again, it is clear that statements condemning, and regretting Israel’s unlawful measures are not sufficient”.

“It is time that words are followed by swift and determined action by the international community to put diplomatic pressure on Israel to restore the rule of law, justice and human rights in the occupied Palestinian territory”.

Israel urged to allow humanitarians to continue working in Palestine 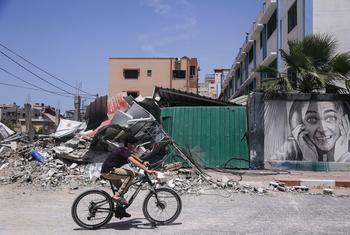 Israel urged to allow humanitarians to continue working in Palestine

Allow human rights and humanitarian organizations to continue their work in the Occupied Palestinian Territory (OPT), UN agencies and other partners have urged Israel.