Ships carrying grain have been leaving there under a recent UN-brokered agreement, and Mr. Guterres said Odesa was a symbol of what countries can achieve when they work together for the common good.

It is very emotional for me to see grain being loaded again on ship in Odesa. This ship also carries hope for the world’s most vulnerable people and countries. #WorldHumanitarianDay pic.twitter.com/lgXPrTGt7q

Speaking to journalists, the UN chief revealed that it was a moving experience to be at the port, where he witnessed wheat being loaded onto a ship.

“It's obviously a reason for joy,” he said.  “But it is also emotional because of the sadness I feel looking into this wonderful harbour and looking into these terminals practically empty with the possibility that this harbour has to develop; that Ukraine and the whole region being cut off because of the war”.

The Odesa port had been paralyzed for months due to the war, which meant that “a critical transportation line from a global breadbasket was cut", he said.

Things are changing under the Black Sea Grain Initiative, the deal to unblock grain and fertilizer exports, signed barely a month ago by Ukraine, Russia, Türkiye and the UN.

Since then, 25 ships have departed from Odesa and other Ukrainian ports, and more are on the way, said Mr. Guterres, speaking alongside Ukraine’s Infrastructure Minister, Oleksandr Kubrakov.

The ships have transported over 600,000 tonnes of grain and food products, namely wheat, corn, sunflower oil, and soybeans.

“But each ship is also a vessel of hope,” he said.  “Hope for Ukrainian farmers finally rewarded for their harvest – with storage being freed up for more. Hope for seafarers and the larger shipping community, knowing that it is once again possible to sail through the Black Sea safely and efficiently.  And, most of all, hope for the world’s most vulnerable people and countries”.

The UN chief issued a special call to rich nations on behalf of vulnerable people everywhere who are bearing the brunt of the global food crisis.

“As these ports open, I appeal for wealthier countries to also open their wallets and their hearts. After all, the movement of grains doesn’t mean much to countries that cannot afford it,” he said.

While no one ever expected the agreement would equal “smooth sailing”, it is unprecedented both in scope and scale, he said, adding that there is still a long way to go.

Mr. Guterres explained that getting more food and fertilizer out of Ukraine and Russia is crucial to further calm commodity markets and lower prices.

“But let’s not forget that what we see here in Odesa is only the more visible part of the solution.  The other part that is also important, that we have been defending, relates to the unimpeded access to the global markets of Russian food and fertilizer, which are not subject to sanctions”.

It is important that all governments and the private sector cooperate to bring them to market, because “without fertilizer in 2022, there may not be enough food in 2023", he warned.

The Secretary-General underlined his deep commitment to these objectives, which he said will only happen if all parties cooperate.

He stressed the need to continue efforts towards improving global food supply and stabilizing markets, and to work for peace in line with the UN Charter and international law.

“Today, Odesa is more than just a shipping centre.  This port is a symbol of what the world can do when we commit to working together for the common good,” he said.

“The Ukrainian people has been suffering so much. They have witnessed so many deaths, so much destruction that it is legitimate to aspire for peace. But again, I repeat peace in line with the UN Charter, peace in line with international law.  That is the best way to mark World Humanitarian Day and help set the course for a more just and peaceful world for all”.

Ukraine: More than one million tonnes of grain and food items exported under Black Sea deal

Secretary-General's full remarks to the press in Odesa, Ukraine 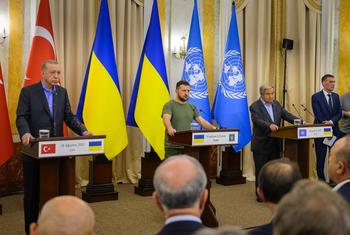 Positive momentum on the landmark Black Sea Grain Initiative to help vulnerable people access food reflects “a victory for diplomacy” for those caught in a cost-of-living crisis as well as for Ukraine’s hard-working farmers, UN Secretary-General António Guterres told reporters on Thursday in Lviv, Ukraine.