UN Photo/Sophia Paris
A member of the Peruvian Battalion serving with MINUSTAH guards a facility on the edge of Cité Soleil and Cité Militaire in Port-Au-Prince, Haiti, allowing people to come in and register.

The assistance comes amidst the killing of hundreds of people since July in clashes between gangs in Haiti's Cité Soleil, said the UN humanitarian agency (OCHA) spokesperson, Jens Laerke.

I’ve allocated US$5M from @UNCERF for an urgent response for humanitarian needs caused by gang violence in #Haiti.Hundreds of people have been killed & 277k people are affected by the recent clashes in Cité Soleil. This allocation allows agencies to scale up critical response. pic.twitter.com/4BgUpDQa2i

Many others have been trapped in the fighting, as gang control over the highways continues to grow.  This has cut off their access to drinking water, food and health care. “Overall, we estimate that nearly 280,000 people are affected by this situation” Mr. Laerke added.

With a current estimated population of around 300,000, Cité Soleil is one of the most deprived communes in Port-au-Prince and its humanitarian whose development needs were huge even before the current upsurge in violence.

The UN has said that between 8 and 17 July, over 471 people were killed, injured or unaccounted for.

Serious incidents of sexual violence against women and girls, as well as the gang recruitment of boys have also been reported.

Around 3,000 people have fled their homes, including hundreds of unaccompanied children, while at least 140 houses have been destroyed or burnt down.

Last month, Humanitarian Coordinator Ulrika Richardson had called on all parties to end the deadly violence and ensure open a humanitarian corridor to Cité Soleil, describing the needs as “immense” and “growing,” as a result of poverty, a lack of basic services, and a recent spike in violence.

A high level of insecurity is compromising humanitarian access to affected people, as well as to basic services such as health and education for between one million to 1.5 million people trapped in gang-controlled neighbourhoods, according to the OCHA spokesperson

Mr. Laerke pointed out that although “a small amount,” it is “a critical amount of money right now”.

The CERF allocation will help humanitarian agencies increase their responses, and funding through the UN Children's fund (UNICEF) and the World Food Programme (WFP) will provide food, drinking water, health care, mental health and education support to more than 100,000 people in total.

To assist an estimated 4.9 million Haitians, or about 43 per cent of the total population this year, the Haiti humanitarian response plan, is asking $373 million, but, warned Mr. Laerke, it is only “14 per cent funded”.

Since March 2006, it has enabled humanitarian partners to deliver over $5.5 billion in life-saving assistance in over 100 countries and territories.

Mr. Laerke explained that following an injection of CERF money, “other donors follow because it comes with a message that this is critical lifesaving interventions we need now”.

Meanwhile, a year after a devastating 7.2 magnitude earthquake struck southwestern Haiti, and three weeks before the beginning of a new academic year, UNICEF warned that more than 250,000 children lack access to adequate schools.

Insecurity and an absence of funding have delayed their reconstruction, the UN agency had said in a statement.

To date, only 30 per cent of that funding has been received – threatening aid delivery for the most vulnerable in the country, the agency warned. 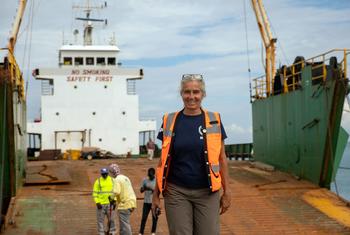 With Haiti’s highways increasingly in the grip of gangs, aid delivery by ship is becoming increasingly critical. Captain Madeleine Habib, a shipping officer working for the World Food Programme in Haiti, spoke about her experiences ahead of World Humanitarian Day, which is marked annually on 19 August.