“These military actions near such a large nuclear facility could lead to very serious consequences,” Mr. Grossi said at the meeting requested by Russia, which was marked by resounding calls to allow the Agency’s technical experts to visit the area amid mounting safety concerns.

IAEA has been in frequent contact with both Ukraine and Russia to ensure that it has the clearest picture possible of the evolving circumstances.

Providing an overview, the IAEA chief said that on 5 August, the Zaporizhzhia plant – Europe’s largest – was subjected to shelling, which caused several explosions near the electrical switchboard and a power shutdown.

One reactor unit was disconnected from the electrical grid, triggering its emergency protection system and setting generators into operation to ensure power supply.

The senior UN official said that there was also shelling at a nitrogen oxygen station.  While firefighters had extinguished the blaze, repairs must still be examined and evaluated.

He said that the preliminary assessment of IAEA experts indicate that there is no immediate threat to nuclear safety as a result of the shelling or other military actions.

However, “this could change at any moment,” Mr. Grossi cautioned.

He recalled his recent address to the ongoing Tenth Review Conference of the Parties to the Nuclear Non-Proliferation Treaty, where he outlined seven indispensable pillars that are critical for nuclear safety and security.

These included aspects dealing with the physical integrity of the plant, off-site power supply, cooling systems, and emergency preparedness measures.

“All these pillars have been compromised if not entirely violated at one point or another during this crisis,” flagged the IAEA chief.

“Any nuclear catastrophe would be unacceptable and thus preventing it should be our overarching goal”.

He asked both sides to cooperate with the UN atomic agency.

“This is a serious hour, a grave hour, and the IAEA must be allowed to conduct its mission in Zaporizhzhia as soon as possible”.

Presenting his case, the Russian delegate said Ukrainian forces used heavy artillery against Zaporizhzhia on 5 August, shelling the plant during a shift change to intimidate staff – their own citizens.

He upheld that on 6 August, those forces attacked with cluster munitions, and on 7 August, a power surge occurred, blaming.

In turn, Ukraine’s representative said that the withdrawal of Russian troops and return of the station to the legitimate control of Ukraine is the only way to remove the nuclear threat at Zaporizhzhia.

The Ukrainian Ambassador insisted on the need to send a mission to the site and has negotiated modalities with the Agency.

“Despite their public declarations, the occupiers have resorted to manipulations and unjustified conditions for the site visit,” he said.

Given the militarization of the site by Russian armed forces, such a mission must include qualified experts in military aspects. 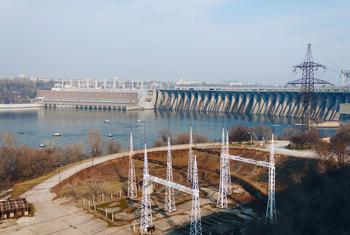 Military activities around the Zaporizhzhia Nuclear Plant in Ukraine must stop immediately, UN Secretary-General António Guterres said on Thursday, warning of the potential danger to the area and beyond amid ongoing shelling. 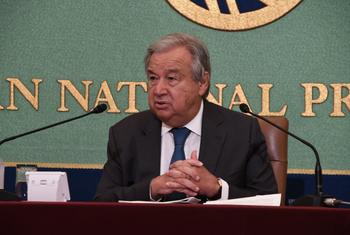 UN Secretary-General António Guterres condemned a recent attack on a nuclear power station in southern Ukraine during a meeting in Tokyo on Monday with the Japan National Press Club.