UN experts on Wednesday denounced the decision by Belarus to withdraw from an international agreement that upholds people’s right to access information, as well as justice, in environmental matters.

The Aarhus Convention, adopted in 1998, also requires that individuals exercising these rights are not persecuted, penalized or harassed for doing so.

Belarus’s President Aleksandr Lukashenko signed a decree on 18 July effectively ending the country’s participation.  Withdrawal is scheduled to take effect on 24 October, in line with article 21 of the Convention.

In denouncing the move, the UN experts noted that the Aarhus Convention has had considerable success in strengthening access rights, sustainable development and environmental democracy.

They said it is a leading example among international instruments on implementing human rights obligations relating to environmental protection, specifically the rights to information, public participation and justice.

“Key to the Aarhus Convention’s success has been the work of its Compliance Committee, including the ability of members of the public to bring cases of alleged non-compliance with the Convention before the Committee,” they added.

The Compliance Committee as a non-confrontational, non-judicial and consultative mechanism, according to the experts, and its findings have considerably furthered implementation of the Convention.

They recalled that since 2014, the Committee has closely scrutinized the conduct of Belarus in respect of persecution, penalization and harassment of environmental rights defenders. Members also worked to assist the country in addressing non-compliance.

Despite this, the Committee found that Belarus had not yet addressed its recommendations, and expressed grave concern that the situation for environmental human rights defenders there was rapidly deteriorating.

Shortly thereafter, the Committee found that the August 2021 liquidation of an environmental non-government organization was a further incident of persecution, penalization and harassment.

Given the gravity of the situation, the remaining States party to the Convention moved to suspend the special rights and privileges accorded to Belarus.

The UN experts stated that countries dissatisfied with the outcome of cases, decided by the Compliance Committee, should not withdraw from the Convention. Instead, they should strengthen their commitment to human rights, sustainable development and environmental democracy.

“Countries should take concrete measures to secure effective enjoyment of the rights to information, public participation and justice, and this includes securing a safe and enabling environment for environmental human rights defenders and all other representatives of civil society,” said the experts.

“Protecting environmental human rights defenders from violations committed by both State and non-state actors is crucial to the protection of the environment and the human rights that depend on it”.

The seven experts who issued the statement were appointed by the UN Human Rights Council, located in Geneva.

These Special Rapporteurs have been given mandates to monitor and report on specific country situations or thematic issues, such as the promotion and protection of human rights in the context of climate change.

Experts serve in their individual capacity and are neither UN staff, nor are they paid for their work. 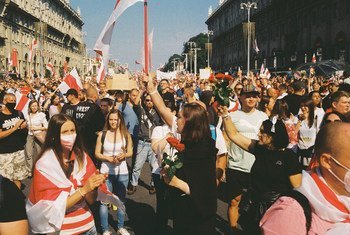 The deterioration of human rights in Belarus continues to engulf the country in a climate of fear and arbitrary rule, a UN-appointed independent human rights expert warned on Wednesday.