One year on from a devastating earthquake which struck Haiti, communities are rebuilding their lives, and aiming to be better prepared when future disasters strike.

A line of women carry rocks in the hands and on their heads as they descend to a gully on the side of a hill in southern Haiti. They are bringing the rocks so their community can build barriers which will slow down the flow of water across this verdant valley and protect the land, which is so important to this rural farming community, from erosion.

The team of workers building the barriers is made up of women and men from vulnerable communities in one of three departments across Haiti’s southern peninsula which were hit by a destructive 7.2 magnitude earthquake on 14 August, 2021.

More than 2,200 people died in the disaster and over 137,000 homes were destroyed or damaged, as well as hospitals, schools and key transport infrastructure, including roads and bridges.

Just down the valley, another team of around 36 people is working hard at clearing the road. They are being paid some 500 Haitian gourdes (around $5) for a 4-5 hour day and will spend 20 days working to improve their community.

“The money I earn helps me to pay for food, school and other household needs,” says Tesse Medgune. “Many families lost their livelihood because of the earthquake so this helps us to survive.”

The rehabilitation work on the side of the hill and valley road is supported by the World Food Programme (WFP) and is part of a Haitian government effort to improve the resilience of vulnerable people who are threatened by natural disasters. Many of these people are also receive support to improve food production activities and their nutrition.

There are 16 similar teams in in this immediate area and many more across the southern peninsula of Haiti where the earthquake caused most damage.

“The money people have earned is important in the short-term to get them through the difficult post-earthquake period,” says WFP’s Sophia Toussaint, ‘but it’s also crucial to their longer-term future. Protecting the hillside stops soil erosion and means farmers are less likely to lose their crops in a natural disaster; having a good road allows produce to be more easily sent to market” she adds. “It also means that aid can be delivered more effectively, and people can get to hospital if there is another earthquake.”

Jerry Chandler is the Director General of Haiti’s Civil Protection agency. “We have worked closely with our international partners, including the UN, to ensure that our disaster response is more robust. So, we are planning for the eventuality of another disaster happening but also ensuring that the impact is lessened.”

A year on from the earthquake, the United Nations continues to support communities throughout the three most affected departments: Grand Anse, Nippes and Sud. Some 26,200 people fled their uninhabitable homes, and the majority were accommodated in 85 temporary displacement sites.

UN Haiti/Daniel Dickinson
Roslaine Jeantine sold a goat to pay for the installation of a new roof.

A majority have now returned home including Roslaine Jeantine and her three sons. The roof of her small home in the commune of Laurent just outside the city of Les Cayes, collapsed in the earthquake injuring the leg of her oldest son. However, the walls remained in place, and she was encouraged to return home with the support of a roof building kit provided by the International Organization for Migration (IOM).

“I sold my goat to pay for two carpenters to install my new roof,” says Ms. Jeantine. “I still feel panicked when I hear a loud noise, thinking it could be another earthquake, but I know that this roof is well made and will protect me and my family from bad weather.”

IOM has distributed around 100 kits in Laurent, which include everything a family needs to build a roof; wood, tin sheets, nails and more. In total, some 500 have been distributed across the earthquake-affected area to the most vulnerable families.

UN Haiti/Daniel Dickinson
The walls of Roslaine Jeantine's home withstood the earthquake of August 2021, but not the roof.

“These roofs are important not just because they provide shelter,” says IOM’ s Jean Gardy Saint Juste, “they also empower families to make their own decisions about how to repair their houses and thus rebuild their lives. In this sense they are creating their own resilience to future disasters with a little support from IOM.”

As houses are rebuilt roof by roof, and roads repaired stone by stone, UN agencies are still working in the three departments, providing much needed services, but also creating space for communities to make decisions about how best to protect themselves when the next disaster strikes. 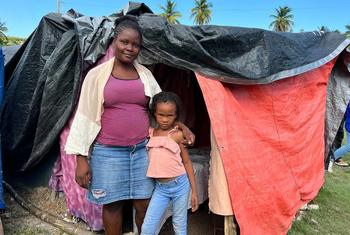 On 14 August 2021 a 7.2 magnitude earthquake struck Haiti, destroying, or rendering uninhabitable tens of thousands of houses across three departments in the south of Haiti, including Plaisimond Milaure’s home. Since then, she’s been living in a tent outside the city of Les Cayes, supported by UN agencies. One year on, she is ready to return.