Ethiopia: Loan from UN fund allows FAO to scale up fertilizers for farmers in Tigray

© FAO/Michael Tewelde
FAO and partners delivered 262 tonnes of fertilizer to the Tigray region of Ethiopia to aid food production.

Ethiopia: Loan from UN fund allows FAO to scale up fertilizers for farmers in Tigray

A $10 million loan from the UN’s Central Emergency Response Fund (CERF) will allow the Food and Agriculture Organization (FAO) to scale up the procurement of fertilizers to support farmers in the restive Tigray region in northern Ethiopia, the agency announced on Monday.

Since conflict erupted in November 2020, Tigray and other regions have seen the widespread disruption of agriculture, elevated levels of acute food insecurity, and loss of livelihoods.

Tigray (northern Ethiopia): thanks to a $10 million loan from @UNCERF, @FAO is scaling up the urgent procurement of fertilizers to help farmers sow their fields in the midst of the critical planting season.👉 https://t.co/3WLkaMpep1 pic.twitter.com/hOEKbFQA95

The loan forms part of resource partners’ commitments to FAO, and the provision of fertilizers will help farmers sow their fields during the critical planting season. However, this support must be delivered and applied by the end of the month.

“If farmers receive the inputs they need, they will be able to harvest and begin consuming this produce from October 2022. These harvests would cover their food needs for at least six months, and in the best-case scenario, up to the next harvest for a significant proportion of the households, with surplus to sell,” he said.

Meanwhile, Rein Paulsen, Director of FAO’s Office of Emergencies and Resilience, pointed to the wider implications.

“There is a small window of opportunity to prevent severe hunger by delivering critical agricultural inputs and enable farmers to produce sufficient amount of food for the population thus averting a potential increase in humanitarian needs,” he added.

Up to 80 per cent of Ethiopians depend on agriculture as their main source of livelihood, especially those living in rural areas, and their produce feeds the nation.

The main growing season is known as Meher, and it is the most important season for crop production in Tigray.

FAO said that with rainfall performing well, coupled with a favourable outlook, the season offers a crucial and cost-effective opportunity to improve food production and availability across the region.

The UN agency and partners have so far procured just over 19,000 tonnes of fertilizer, or 40 per cent of requirements.  This is enough to meet the needs of some 380,000 households, and a first batch of 7,000 tonnes has already been distributed to farmers.

The additional 12,000 tonnes were procured through the CERF loan, along with a similar allocation by FAO.  The loans are against funding being secured from a bilateral donor, with more details to follow once an agreement is finalized.

The 19,000 tonnes of fertilizer were procured through the Ethiopian Government, and the authorities have indicated that more fertilizer could be made available should FAO and partners mobilize further funding.

FAO said the aim is to provide the total requirement of 60,000 tonnes to Tigray, funds allowing.

The agency has previously benefited from CERF loans in 2017 to avert the risk of famine in Somalia, and to support Desert Locust control operations in the Horn of Africa in 2020. 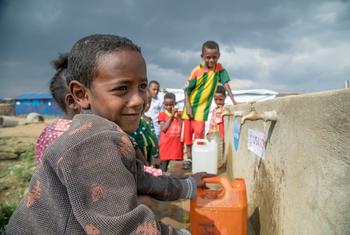