© UNICEF/Sebastian Rich
A child of seven months is being examined for malnutrition due to the severe drought in Somalia.

The World Health Organization (WHO) warned on Tuesday that the Greater Horn of Africa is experiencing one of the worst hunger crises of the last 70 years.

More than 37 million people are facing acute hunger, with approximately seven million children under the age of five acutely malnourished in the region.

While finding food and safe water is the absolute priority, WHO said that ensuring a strong health emergency response is needed to avert preventable disease and deaths.

The health situation is worrisome with multiple outbreaks threatening lives of already fragile populations. WHO has launched today a funding appeal of $US 123.7 million to respond to urgent health needs in the region until December 2022. pic.twitter.com/LZZBBlN969

The UN agency is calling for $123.7 million to respond to rising health needs and prevent a food crisis from turning into a health crisis.

“The situation is already catastrophic, and we need to act now,” said Ibrahima Soce Fall, WHO Assistant Director General for Emergencies Response. “We cannot continue in this underfunding crisis”.

Climate change, conflict, rising food prices and the COVID-19 pandemic have compounded one of the worst droughts in the region in recent decades, according to the WHO appeal,

“There are now four seasons where the rain didn’t come as predicted and a fifth season is estimated to also fail. Places where there is drought the problem keeps worsening and worsening,” said WHO Incident Manager Sophie Maes.

“In other places like South Sudan, there have been three years of consecutive flooding with almost 40 per cent of the country being flooded. And we are looking at something that is going to get worse in the near future."

Over 37 million people in the region are projected to reach the third level of the Integrated Food Security Phase Classification scale (IPC3) and higher in the coming months.

This means that the population is in crisis, and only marginally able to meet minimum food needs by depleting essential livelihood assets or through crisis-coping strategies.

Food insecurity in South Sudan has reached the most extreme levels since independence in 2011, with 8.3 million people comprising 75 per cent of the population facing severe food insecurity.

Acute malnutrition leads to increased migration as populations move in search of food and pasture, according to WHO.

And disruptions often result in deteriorating hygiene and sanitation as outbreaks of infectious diseases, like cholera, measles, and malaria, are already on the rise.

Moreover, weak vaccination coverage and health services with insufficient resources could see a widespread increase in the number of disease outbreaks in country and across borders.

Care for severely malnourished children with medical complications will be severely impacted and result in high child mortality rates.

Disruptions in access to health care can further increase morbidity and mortality, as emergency conditions force populations to modify their health-seeking behaviour and prioritize access to life-saving resources such as food and water.

IOM
Thousands of animals have perished due to the extreme drought ravaging Somalia and the rest of the Horn of Africa.
♦ Receive daily updates directly in your inbox - Subscribe here to a topic.
♦ Download the UN News app for your iOS or Android devices. 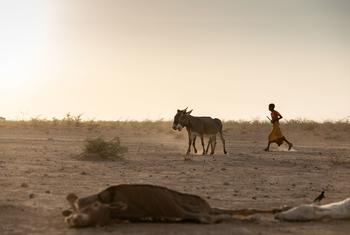 Over 50 million people in Eastern Africa will face acute food insecurity this year, according to a new study backed by the World Food Programme (WFP) and Food and Agriculture Organization (FAO).