“With the increase in food prices across the world, many refugee families are struggling to meet their basic needs on a daily basis,” said Dominik Bartsch, UNHCR Representative in Amman. “There is of course food assistance provided, but overall, household incomes are declining rapidly and we’re seeing the level of poverty increasing in the camp.”

10 years ago, 450 Syrians fleeing the fighting in their country emerged from the desert and crossed the border into Jordan.They became the first residents of the newly opened @ZaatariCamp.#Zaatari10 https://t.co/6OAYKUByCL

According to UNHCR, two in three refugee families in Za’atari say they are in debt and 92 per reported having to resort to negative coping strategies, such as reducing food intake or accepting high-risk jobs. These numbers have been going up at a worrying pace.

And after UN-led constitutional talks between Syria’s warring sides were postponed at the start of the week, a geopolitical casualty of Russia’s invasion of Ukraine, humanitarians remain particularly worried for Syrian children housed at Za’atari, for whom the camp “has become their world”, said Mr. Bartsch.

“Prospects for return for the time being do not look promising. We are not seeing an environment in Syria that would be conducive to returns, but it is nonetheless reassuring that refugees when asked would they consider returning back home, overwhelmingly respond positively.”

More than 20,000 births have been recorded in Za’atari camp since its opening, Mr. Bartsch noted, before pointing to the “limited opportunities for the many children who are born in the camp and have seen no other environs than the camp itself”.

Crediting the camp with “saving thousands of lives and providing work and opportunities “for Jordanians and Syrians alike”, the UN refugee agency official warned that the situation was not sustainable, with its weather-beaten temporary shelters increasingly showing their limitations.

“The caravans, which replaced tents in 2013, have a normal life span of six to eight years meaning most of them are now in need of urgent repair…In 2021 alone, over 7,000 refugees requested support for maintenance as roofs and windows cracked and walls warped, leaving some residents exposed to the elements,” he explained.

Electricity is another area of concern. While a solar plant was opened to power the camp in 2017, its capacity was only able to meet the needs of all residents for 11.5 hours a day.

In recent months, as electricity demand increased for summer, UNHCR had to reduce this to nine hours per day to be able to cope with the additional electricity costs incurred, as the solar plant does not provide for all the camp’s needs.

Jordan hosts 675,000 registered refugees from Syria, who began fleeing in 2011 when civil war erupted, causing terrible suffering, death and economic destruction. Most Syrian refugees in Jordan live in its towns and villages among local communities. Only 17 per cent live in the two main refugee camps, Za’atari and Azraq.

“It is a testimony, a testimony to the generosity of the Government of Jordan, which at the time 10 years ago, 11 years ago, allowed Syrian refugees access to its territory and then set up facilities that really are remarkable by global standards,” said Mr. Bartsch of Za’atari, speaking via video link from Amman to journalists in Geneva.

Humanitarian support for refugees in the camp is spearheaded by the Jordanian government and UNHCR, which has almost 1,200 staff from 32 different international and Jordanian organizations working there.

“This humanitarian assistance would not have been possible without support from the international community,” said Mr. Bartsch, who also emphasised the determination and resilience of the camp’s residents that have seen almost 1,800 shops and businesses start from nothing.

“From cell phone stores to restaurants, bridal shops to mechanics, these businesses employ an estimated 3,600 refugees,” the UNHCR official continued. “But they do not operate in isolation.

Refugee entrepreneurs regularly engage with companies and clients in the nearby city of Mafraq and contribute to the Jordanian economy and host society.”

In addition to co-managing the camp with the authorities, UNHCR and its partners provide protection, health and cash assistance to the women, men, and children in the camp.

“In the long run, our projection is that a continued approach of gradual inclusion of refugees in national assistance is the pathway to follow,” Mr. Bartsch said, praising Jordan for allowing “from early very”, access of refugees to education, health and the labour market. 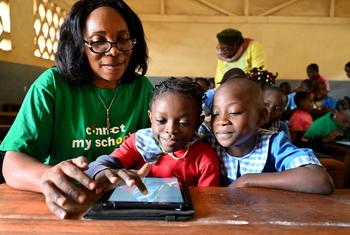 More and more young women and girls are highlighting the importance of access and safety in the digital world. Marking International Girls in ICT Day, on Thursday, UN agencies have issued a call to action to ensure equal access to digital learning opportunities. 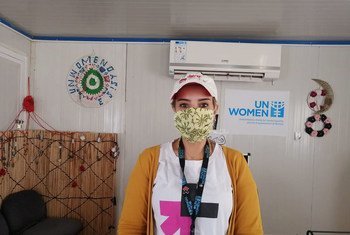 The COVID-19 inoculation is "just like any other vaccine" a UN Women staff member is telling the Syrian refugee women she cares for in camps in Jordan, as she tries to combat misinformation and false rumours, and avoid spikes in infection.