UN Photo/Mark Garten
Rosemary DiCarlo, Under-Secretary-General for Political and Peacebuilding Affairs, briefs members of the UN Security Council on the situation in Ukraine.

The war in Ukraine shows no signs of ending, more than five months after the Russian invasion, and fighting is intensifying, the UN Security Council heard on Friday.

Ambassadors were briefed by UN political affairs chief Rosemary DiCarlo, who pointed to the recent agreement on the safe resumption of grain exports via the Black Sea as a bright light in the conflict, though acknowledging the dim prospects for peace.

“The grain agreement is a sign that dialogue between the parties is possible in the search to ease human suffering,” said Ms. DiCarlo, officially the Under-Secretary-General for Political and Peacebuilding Affairs.

She added that the UN is making every effort to support implementation of the deal, which was signed last week in Türkiye.

The war’s impact globally is “glaringly clear”, said Ms. DiCarlo, noting that the consequences will only become more pronounced the longer fighting lasts, particularly with the onset of winter.

“Despite the encouraging developments on grain and fertilizers, we remain deeply concerned about the lack of prospects for a shift towards a meaningful resumption of diplomatic efforts to end the war,” she told the Council.

“Escalatory rhetoric from any side, including about expanding the conflict geographically or denying Ukraine’s statehood, is not consistent with the constructive spirit demonstrated in Istanbul.”

Ms. DiCarlo said that since her last briefing in late June, deadly attacks by Russian forces have continued unabated, reducing many Ukrainian cities and towns to rubble.

The number of civilians killed, wounded, or maimed has also increased. As of Wednesday, there were 12,272 civilian casualties, including 5,237 deaths, according to the UN human rights office, OHCHR.

“This represents at least 1,641 new civilian casualties since my last briefing: 506 killed and 1,135 injured. These are figures based on verified incidents; the actual numbers are considerably higher,” she said.

Ms. DiCarlo also warned of reported efforts to alter administrative structures on the ground, including attempts to introduce local governing bodies in Russian-controlled areas, which raise serious concerns about the political implications of the war.

“As the conflict enters a more protracted phase, attention is increasingly turning to its longer-term humanitarian, recovery, reconstruction, and socio-economic impact. As summer wanes, the need for winterization planning is also becoming pressing,” she said.

“Regrettably, political dialogue has virtually ground to a halt, leaving people without the hope that peace will come anytime soon.”

UN agencies also continue to document damage and destruction to civilian infrastructure such as homes, schools and healthcare facilities.

The impact on the health sector is “particularly alarming”, she said, as there have been 414 attacks so far, resulting in 85 deaths and 100 injuries.

“This includes 350 attacks on facilities in areas of conflict, where on average around 316,000 patients were treated per month,” she said.

Since the start of the war, the UN and humanitarian partners have provided aid to some 11 million people, including in the form of food and livelihood assistance, protection services, mine clearance, and in accessing safe water and sanitation.

Nearly six million Ukrainian refugees have found shelter across Europe. Since the war began on 24 February, border crossings from Ukraine have totalled more than 9.5 million, while crossings to Ukraine numbered 3.8 million.

“We are concerned that winter will make it harder for the displaced or the returnee community to have access to shelter and health care,” said Ms. DiCarlo.

© UNICEF/Ashley Gilbertson VII
A twelve-year-old boy visits his mother in hospital for the first time since she was injured a month ago, by flying shrapnel.

She also drew attention to the war’s specific impact on women and girls, particularly in areas such as food security and health.

Women’s access to health services, including sexual and reproductive health, is rapidly deteriorating, as is access to newborn and child healthcare. They are also now largely responsible for home-schooling, as access to education is severely hindered due to the constant threat of bombing.

“Incidents of gender-based violence, including allegations of sexual violence in conflict have increased, but services for survivors are not provided in full. It is also likely that many victims and survivors are currently unable to report their cases.”

Ms. DiCarlo stressed that it is especially for these reasons why women must be meaningful participants in discussions and initiatives to shape the future of the country, including peace negotiations, recovery efforts, peacebuilding and accountability efforts.

The top UN humanitarian official in Ukraine, Osnat Lubrani, was in the port city of Odessa on Friday, together with the country’s President, Volodymyr Zelenskyy, and ambassadors from G7 countries, according to her official Twitter account.

It was an honor to talk to @ZelenskyyUa about the ongoing, wide-ranging #UN support to Ukraine. As I end my assignment in Ukraine today, I know our efforts will continue to grow under the leadership of my successor, Denise Brown, who assumes her position tomorrow. pic.twitter.com/Utky9asVmh

This week saw the start of an operation under the grain exports deal, known as the Joint Coordination Centre (JCC), which will monitor ships transporting grain, as well as related foodstuffs and fertilizers, from Odessa and two other ports along the Black Sea.

The JCC brings together representatives from Ukraine, Russia, Türkiye, and the UN.

Ms. Lubrani wrote that she was “very hopeful for the movements of ships to take place soon, taking much needed grain and related foodstuffs from Ukraine to countries that need them the most”.

She added that it was an honour to talk to President Zelenskyy and to reaffirm the UN’s ongoing support to Ukraine.

The visit took place on Ms. Lubrani’s final day as the UN’s Resident Coordinator and Humanitarian Coordinator in Ukraine. Her successor, Denise Brown, will assume the post starting on Saturday.

The launch of the Joint Coordination Centre (JCC) is an example of how the international community can affect change even amid the war in Ukraine, a UN humanitarian official said in the capital, Kyiv, on Friday.

Saviano Abreu of the UN humanitarian affairs office, OCHA, was among representatives from six UN agencies who briefed journalists on their ongoing operations to assist millions both within and outside Ukraine whose lives have been uprooted by the conflict.

“Although the world’s attention seems to be moving elsewhere, the situation in the country is far from any change,” he said.

While humanitarians have provided support to 11 million people so far, he said “we do know that it is not enough”.

Mr. Abreu reported that since the start of the Russian invasion, aid workers have not been able to send relief items to areas beyond the government’s control.

He underscored the obligation to allow free and safe humanitarian passage to all people in need.

“We saw this week that when there is a will, things can change”, said Mr. Abreu, referring to the JCC launch.

“Now we have to go one step further and make sure that no one is left behind also here in Ukraine. We need the parties to gently agree on humanitarian access to all regions of Ukraine, so we can save lives and alleviate the suffering of people who have endured these five months of war.” 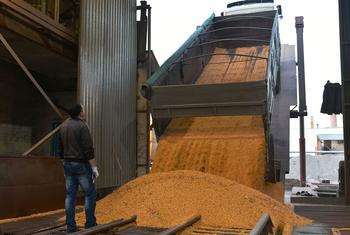 UN Secretary-General António Guterres has welcomed the official start of the operation based in the Turkish city of Istanbul, that will help implement the UN-brokered deal to resume exports of Ukrainian grain via the Black Sea, amid the ongoing conflict and rising food prices worldwide.