The deadly shelling of a mountain resort in northern Iraq last week represented a shocking disregard for civilian life and international obligations on civilian protection, the UN Special Representative for the country, Jeanine Hennis-Plasschaert, told an emergency session of the Security Council on Tuesday.

Ambassadors convened late in the afternoon New York time, to discuss the 20 July attack in Zahko, a city in the Kurdistan region near the border with Türkiye, in an area where Turkish forces are conducting counter-terrorism operations against outlawed militant groups.

Ms. Hennis-Plasschaert provided a timeline of developments since five artillery rounds struck the Parkha resort, which was packed with visitors, including children. Nine people were killed and 33 injured.

Iraq attributed the attack to Turkish forces and called for an investigation, but Ankara issued a press release stating that it is “against all kinds of attacks targeting civilians” and “ready to take all steps to reveal the truth”, she reported.

“This horrific attack on a well-known and clearly identifiable tourist site demonstrates a shocking disregard for civilian life and for the universally accepted standards of international humanitarian and human rights law which seek to protect civilians,” said Ms. Hennis-Plasschaert, speaking via videolink.

“While all parties to any conflict must take all feasible precautions to avoid harm to civilians at all times, this was clearly not adhered to.”

The UN envoy said she spoke with Iraq’s Prime Minister on Monday, who again emphasized the importance of conducting a transparent and thorough investigation into the incident, whether independently, or jointly.

“It is vital, he said, to put a stop to speculations, denials, misunderstandings and rising tensions,” she told ambassadors. “Meanwhile, I understand that Türkiye is also ready to address the issue jointly, with Iraq, in order to determine exactly what happened.”

Ms. Hennis-Plasschaert stressed that it is of the greatest importance that all attacks on Iraqi territory cease.

“Such aggression not only recklessly heightens national and regional tensions but also causes, as we have seen, grave human tragedies,” she said.

“As I have said many times in past years, Iraq rightfully rejects the notion that it can be treated as an arena for external and regional rivalries - as an arena where neighbours, and any other actor for that matter, routinely, and with impunity, violate its sovereignty and territorial integrity.”

“This is a military aggression against the sovereignty and security of Iraq and its territorial integrity.  It is a violation and a threat to regional and international peace and security,” he said, speaking through an interpreter.

Mr. Hussein urged ambassadors to adopt a resolution that calls for Türkiye to withdraw its forces from all Iraqi territory.

The aggression must also be strongly condemned and the perpetrators held accountable, he added, while an international independent inquiry should be established to look into the incident.

The Foreign Minister further called for the situation between Iraq and Türkiye to be included on the Security Council’s agenda, and for the Turkish government to provide recompense for the damage caused in the wake of the aggression.

Öncü Keçeli, Türkiye’s Deputy Permanent Representative, said his country was in contact with the Iraqi authorities and the Kurdistan regional authorities immediately after the attack.

“We made it clear that Türkiye is ready to take all the steps to unveil the truth,” he said.

“Therefore, we believe that this meeting is very important to set the record straight - not only with the members of the Council, but also with our brothers and sisters in Iraq.”

Mr. Keçeli said Türkiye has always maintained its strong support for Iraq’s sovereignty, territorial integrity, stability and prosperity, adding that any claims to the contrary are untrue and ill-intended.

“Let us make it very clear. The sovereignty and territorial integrity of Iraq are breached by terrorist organizations, not by Türkiye.” 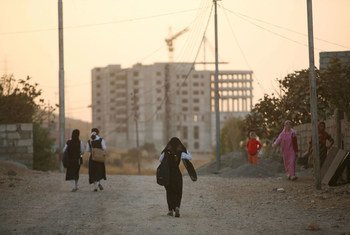 The UN Assistance Mission for Iraq (UNAMI), has strongly condemned the shelling of a mountain resort in the Kurdistan region of Dohuk Governorate on Wednesday, which reportedly killed eight tourists and wounded more than 20 others. In a statement issued on Thursday, the UN chief added his condemnation and called for a prompt investigation into the shelling.