The role of electoral authorities is fundamental to protect democratic space in Peru, UN High Commissioner for Human Rights Michelle Bachelet said in the capital, Lima, on Wednesday, concluding a two-day mission to the country.

“Polarization has been deepening over recent months and there are troubling indications that an anti-rights movement is gaining ground. With local and regional elections due in October, I am concerned that hate speech, discrimination and violence could further increase,” she said.

🇵🇪#Peru: UN Human Rights Chief @mbachelet ends 3-day official visit."Peru’s human rights challenges are clear, but I am convinced that they can be overcome &amp; a way to a more inclusive future found. It is important to not lose hope."https://t.co/XZv8pboDgs pic.twitter.com/Ty5RgC96BV

Ms. Bachelet recalled that although Peru already has “important tools” in place to counter any regression in upholding human rights, efforts are needed to ensure these laws, policies and protocols are implemented.

The way forward requires different sectors of society coming together for an inclusive national dialogue that represents the country’s rich diversity.

“To this end, I urge all political parties to act with what I call generosity, and with a sense of political responsibility, to address the challenges that the country faces. State institutions that are strong, transparent, accountable and ready to root out corruption are fundamental for this process,” she said.

Ms. Bachelet met with a wide swath of society during her visit, including the President and members of his cabinet, lawmakers, and representatives from the justice system, civil society, the private sector, indigenous communities and victims of human rights violations.

The South American country is still recovering from the COVID-19 pandemic, and Ms. Bachelet addressed its devastating impacts. Peru had the world’s highest per capita death rate, with some 213,845 people succumbing to the disease.

“The pandemic laid bare the deep socio-economic divisions in Peruvian society, and its effects will reverberate for years,” she said, noting that rural areas, impoverished people, and marginalised and discriminated groups were among those particularly affected.

Rising food and fuel prices, stemming from the war in Ukraine, are also having an impact on recovery in a country where some 15.5 million people are considered to be food insecure.

As the planting season approaches, the High Commissioner feared this “troubling situation” could worsen due to fertilizer shortages.

“I have raised with all my interlocutors that socio-economic protection measures should be extended and be focused on generating tangible improvements for the most marginalised. Supporting small-scale agriculture and prioritizing efforts to help people move from the informal labour market are clear ways to build back better,” she said.

Ms. Bachelet also focused on issues affecting indigenous peoples and human rights defenders, who are on the frontline when it comes to the impact of threats such as climate change, illegal mining, illegal logging, and drug trafficking, especially in the Amazon region.

“They should be seen as allies in efforts to tackle the impunity of criminal groups,” she said, adding that “indigenous peoples living in voluntary isolation are also affected by illicit activities.”

Although mining and other extractive industries have been central to Peru’s economy for centuries, Ms. Bachelet said their “development promises” have often failed to benefit affected communities, especially indigenous peoples and rural populations.

“Agreements reached to address social discontent provoked by extractive and other projects should be based on prior consultation, ensure protection for underlying rights to land and resources, incorporate social and environmental safeguards and mitigate any negative impacts,” she said.

The private sector also has an important role to play through the development of voluntary and mandatory measures to implement corporate due diligence.

“Private sector representatives whom I met stressed to me their commitment to advance the UN Guiding Principles on Business and Human Rights. I also encourage initiatives to move towards renewable and green energy,” she added.

The High Commissioner spoke about her meetings with people who suffered violations, including a woman who was tricked and forcibly sterilized.  Decades later, she is still seeking justice.

“She was one of thousands of women and men - mostly rural, poor and Quechua-speaking - who experienced this violation,” she said.

The High Commissioner’s visit coincided with the 30th anniversary of the “horrific” Tarata bombing by the Sendero Luminoso (Shining Path) guerilla group, which resulted in the deaths of 25 people, and the La Canuta massacre, in which nine students and a university professor were abducted and killed by a military death squad.

“Coming to terms with Peru’s period of violence from 1980 to 2000 is vital to overcome key challenges of today, including current levels of political and social polarization,” she stated.

“Peru’s human rights challenges are clear, as we have heard over the past two days. Based on the discussions I have had, I am convinced that they can be overcome and a way to a more inclusive future found. It is important to not lose hope.”

Peru: Lethal force by police officers must be barred from peaceful demonstrations 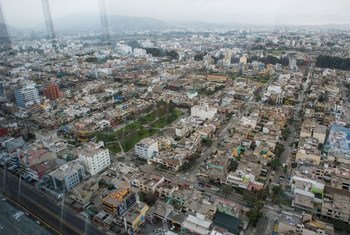 Peru: Lethal force by police officers must be barred from peaceful demonstrations

Peru has failed to protect the rights of two fleeing demonstrators who were shot dead when police opened fire on a non-violent march in February 2008, the UN Human Rights Committee said in a decision published on Friday.