© UNICEF/Rindra Ramasomanana
Students attend an event after school in Madagascar.

Despite two years of a “surreal struggle” against the COVID-19 pandemic, and amidst rising global challenges, optimism for achieving sustainable development persists, a senior UN official declared on Wednesday.

Collen V. Kelapile, President of the Economic and Social Council (ECOSOC), was delivering opening remarks to the ministerial segment of its ongoing High Level Political Forum on Sustainable Development (HLPF).

The #GlobalGoals are facing some serious global challenges.But the #SDGs &amp; the #2030Agenda are still within our reach, if we start acting now.Join us at the #HLPF Ministerial Segment from July 13-15 to act NOW for the SDGs 👉 https://t.co/a8NJwb88AY Live: https://t.co/I2kvDiORh3 pic.twitter.com/FWL0xo8rv2

Countries are meeting in the General Assembly Hall to examine how recovery policies can reverse the pandemic’s negative impacts on the common goal of creating a more equitable future for all people and the planet.

The current global challenges must not dampen their resolve and determination, said Mr. Kelapile, underscoring that nations must act together in solidarity.

“After two years of a surreal struggle against the pandemic, it is true that we now live in a world of increased conflict, inequality, poverty, and suffering; of economic instability; energy and imminent food crisis; increasing debt levels; of a slowing of progress towards gender equality and the empowerment of women,” he said.

“And yet, one of the key messages that we have heard in the past few days of the High-Level Political Forum is that - despite our grim times - there is a continued air of optimism that the 2030 Agenda for Sustainable Development provides us a framework for building back better.”

The world is in deep trouble, but “we are far from powerless”, UN Secretary-General António Guterres told the gathering.

He outlined four areas for immediate action, starting with recovery from the pandemic in every country.

“We must ensure equitable global access to COVID-19 vaccines, therapies and tests. And now it is very important to have a serious effort to increase the number of countries that can produce vaccines, diagnostics, and other else technologies thinking about the future,” he said.

© UNICEF/Seyba Keïta
A health worker in Mali prepares one of 396,000 COVID-19 vaccine doses supplied to the West African country through the COVAX Facility.

The UN chief also underscored the need to tackle the food, energy and finance crisis, stating that Ukraine's food production, and the food and fertilizer produced by Russia, must be brought back to world markets, despite the ongoing war.

“We have been working hard on a plan to allow for the safe and secure exports of Ukrainian produced foods through the Black Sea and Russian foods and fertilizers to global markets,” he said.  “I thank the governments involved for your continued cooperation.”

However, today’s crises cannot be solved without a solution to the crisis of economic inequality in the developing world, he added, calling for greater resources, “fiscal space”, as well as flexibility and understanding on the part of global financial institutions.

The Secretary-General also called for a New Global Deal so that developing countries can have a fair chance at building their own futures, and for reforming the global financial system to one that “works for the vulnerable, not just the powerful.”

The pandemic has revealed glaring inequalities, both within and between countries, and as with all crises, it is the most vulnerable and marginalized who are worst affected.

“It is time to prioritize investment in people; to build a new social contract, based on universal social protection; and to overhaul social support systems established in the aftermath of the Second World War,” said Mr. Guterres.

Any hope of solving the world’s challenges starts with education, he added, but it too is “racked by a crisis of equity, quality and relevance.”  The Secretary-General will convene a summit in September for world leaders to recommit to education as a global public good.

UNDP Afghanistan
A health centre in Afghanistan is using renewable energy reducing the reliance on fossil fuels which are contributing to climate change.

For his final point, the UN chief pushed for ambitious climate action, warning that the battle to keep global temperature rise to 1.5 degrees above pre-industrial levels will be won or lost this decade.

The President of the UN General Assembly, Abdulla Shahid, focused on the importance of hope and solidarity, so that the world will emerge from this period stronger, more resilient, and more sustainable.

“To break the vicious cycle of crises we must do more than ‘look’ towards a more sustainable future, we must put it into practice,” he said.

Learn from the pandemic

Mr. Shahid called for placing greater investments in areas such as social protection, poverty reduction and climate action, in addition to empowering young people as “agents of a sustainable transformation.”

Countries must also learn from the pandemic, particularly where systems and policies proved dysfunctional.

Like the Secretary-General, he also pressed for reforming the international finance system, particularly in regard to debt relief and vulnerabilities, Overseas Development Assistance (ODA), and humanitarian relief.

Mr. Shahid also appealed for commitment to address both the situation of the most vulnerable countries and for the sustainable development of Africa, including support for achieving universal vaccination, food security and energy access across the continent.

“We have seen countries and communities come together to find common solutions to common challenges. We must build on this in every way we can,” he said. 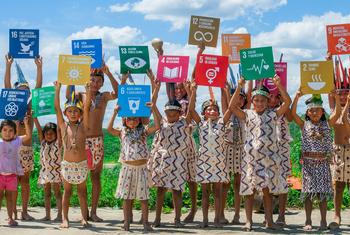 Harnessing partnerships to create a world of “peace and prosperity” that protects people and planet, is the main goal of a key annual development forum that started on Tuesday, the President of the UN Economic and Social Council (ECOSOC), Collen Kelapile, has said.