© UNICEF/Ashley Gilbertson
A ten-year-old boy walks in the courtyard in front of his family’s apartment in central Chernihiv, Ukraine, which was destroyed in an air strike.

The annual UN report on Children and Armed Conflict (CAAC), released on Monday, details the devastating impact that various forms of conflict had on children around the world in 2021.

The dangers outlined in the report range from conflict escalation, military coups, and takeovers, protracted and new conflicts, as well as violations of international law. Cross-border conflict and intercommunal violence also impacted the protection of children, especially in the Lake Chad Basin and Central Sahel regions.

The places where most children were affected by grave violations in 2021 were Afghanistan, the Democratic Republic of the Congo (DRC), Israel and the Occupied Palestinian Territory, Somalia, Syria, and Yemen.

© Paddy Dowling
Kennedy, 13, displaced to Uganda. He is among the 2.3 million South Sudanese refugees that fled the outbreak of civil war.

“There is no word strong enough to describe the horrific conditions that children in armed conflict have endured”, said the Special Representative of the Secretary-General for Children and Armed Conflict, Virginia Gamba.

“Those who survived will be affected for life with deep physical and emotional scars. But we must not let these numbers discourage our efforts. They should serve as an impetus to reinforce our determination to end and prevent grave violations against children. This report is a call to action to intensify our work to better protect children in armed conflict and ensure that they are given a real chance to recover and thrive”.

Ms. Gamba explained that boys and girls often face different risks, a factor it is important to understand when developing prevention and response strategies.

UNMISS/Nektarios Markogiannis
Child Soldiers are released in South Sudan in July 2019 as the country's efforts towards peace continue.

Ukraine among new areas of concern

Two forms of violation showed a sharp increase in 2021: abduction, and sexual violence, including rape, which both rose by 20 per cent.

Attacks on schools and hospitals also showed an increase, which were compounded by the pandemic. More than 2,800 children were detained for their actual or alleged association with parties to conflict, making them particularly vulnerable to torture, sexual violence, and other abuses.

Ethiopia, Mozambique, and Ukraine, have been added to the Secretary-General Annual Report as situations of concern, reflecting the dramatic impact of hostilities on children in these areas.

In addition, the Secretary-General requested enhanced monitoring of violations against children in the Central Sahel Region, similar to his request for the Lake Chad Basin region in 2020.

© Paddy Dowling
Weam was injured in 2014. Walking past the front of their house, Weam, her father and her three cousins were targeted by an anti-personnel drone rocket, which exploded, breaking into thousands of small metallic cubes

Amidst the catalogue of violations, progress was made in some regions. Overall, 12,214 children were released from armed forces and groups in countries including the Central African Republic, Colombia, DRC, Myanmar, and Syria.

The Special Representative outlined the importance of providing children released from armed forces and groups with appropriate support to reintegrate into their communities.

“Parties engaged in peace processes and discussions should consider integrating the rights and needs of children into their negotiations as well as their final agreements, as it remains the only way to reach a sustainable peace”, continued Ms. Gamba, hailing the current truce in Yemen’s conflict as an example.

“When peace goes missing, children are the first to pay the price of this tragic loss”, she declared. “It is more critical than ever to act to protect our children and ensure their safer and better future”.

Children and Armed Conflict in 2021: the figures 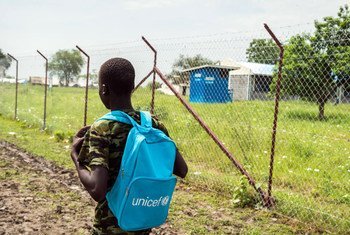