Social protection for rural workers “remains a dream”, according to a report launched in Geneva on Thursday by the Bureau for Workers' Activities (ACTRAV), part of the UN’s International Labour Organization (ILO).

This is of particular concern for those in precarious work conditions, including informal, casual, temporary and subcontracted workers and day labourers who form the large majority of workers on agricultural plantations, laid out in the study: Decent work deficits among rural workers.

Based on 16 cases studies covering 15 countries in Africa, Asia, Central Asia, Europe and Latin America, the report shows that deficits in working conditions are found in every sector and in relation to every substantive element covered by the framework of the ILO’s Decent Work Indicators.

It reveals that child and forced labour as well as debt bondage remain a reality for many worldwide.

Up to 95 per cent of children engaged in hazardous work are employed in agriculture, notably in the cocoa, palm oil and tobacco sectors.

And force labour is linked to the many ways workers are dependent on employers.

“Many of these workers are young and left school at an early age with little or no skills training. The transition from education to gainful employment is difficult, if not impossible, for many young people in rural areas,” Maria Helena André, ILO Director for the ACTRAV Bureau, said in the report’s foreword.

About 80 per cent of the world’s poor live in rural areas, many of whom face severe decent-work deficits, including inadequate safety, low pay, lack of stability and security, and excessive working hours – with women and young workers hit the hardest.

And women are disproportionately represented in the most precarious positions; having to accept low-paying, low skilled jobs, suffer huge gender pay gaps, and more prone to workplace harassment and abuse compared to male workers, the report reveals.

The report also describes chemical exposure as posing serious health and other risks to agricultural workers, particularly to children and pregnant and lactating women.

“Most rural workers operate in the informal economy, which includes a large proportion of women working as unpaid care workers who have no access to maternity leave and other essential protections,” explained the ILO official.

“Workers in rural areas have many aspirations,” she said, adding however, that realizing them is “a tremendous challenge”.

To address these work deficits, the ACTRAV report makes a number of recommendations, including the strengthening of labour administration in rural economies as well as formalizing informal enterprises and employment arrangements.

Finally, it stresses the need for more research and policy analysis to better understand and respond to the needs and expectations of rural workers.

“The economic, development, trade and investment, employment and social protection policies of countries must become more ambitious, as must their frameworks for a just transition to a greener economy and their labour market information systems,” underscored Ms. André.

ILO
How to Achieve Decent Work for Rural Workers
♦ Receive daily updates directly in your inbox - Subscribe here to a topic.
♦ Download the UN News app for your iOS or Android devices. 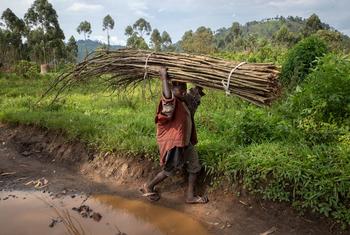 Countries taking part in the 5th Global Conference on the Elimination of Child Labour this week in South Africa, are being urged to do more to end child labour by 2025.