A week since the US Supreme Court overturned a landmark, 50-year-old judgement guaranteeing access to abortion, top UN-appointed independent experts urged United States lawmakers on Friday to adhere to international law that protects women’s right to sexual and reproductive health.

The UN women’s rights committee said that the US is one of only seven countries throughout the world that is not party to the international convention that protects women’s human rights, including their right to sexual and reproductive health.

#RoeVwade: #CEDAW urges #USA, among the only 7 countries NOT parties to the #womensrights Convention, to ratify it &amp; ensure 🚺women access’s to safe &amp; legal abortion. 👉https://t.co/4DFkESJ7vI pic.twitter.com/pkX8XqTxSz

CEDAW noted that while the US signed the convention in 1980, it has yet to ratify it.

UN human rights chief Michelle Bachelet described the US Supreme Court ruling to strike down the Roe v Wade as “a huge blow to women’s human rights and gender equality.”

The committee again reiterated its call for States parties to remove punitive measures for women who undergo abortion and to legalize abortion – at least in cases of rape, incest, threats to the life or health of the pregnant woman, and in the case of severe foetal impairment.

“With 189 States parties, the CEDAW Convention is the only near-universal treaty that comprehensively protects women’s human rights, including their sexual and reproductive health rights”, the statement said.

The UN-appointed panel drew specific attention to article 16, which “protects women’s rights to decide freely and responsibly on the number and spacing of their children”, adding that unsafe abortion is a leading cause of maternal mortality.

They also spelled out that under article 12, the right to health includes bodily autonomy and encompasses women’s and girls’ sexual and reproductive freedoms.

Access to safe and legal abortion and to quality post-abortion care, especially in cases of complications resulting from unsafe abortions, helps to reduce maternal mortality rates, prevent adolescent and unwanted pregnancies and ensure women’s right to freely decide over their bodies.

The committee has repeatedly stressed that denying access to safe and legal abortion is “a severe restriction on women’s ability to exercise their reproductive freedom, and that forcing women to carry a pregnancy to full term involves mental and physical suffering amounting to gender-based violence against women and, in certain circumstances, to torture or cruel, inhuman or degrading treatment, in violation of the CEDAW Convention”.

The UN-appointed committee reiterated its committed to uphold the human rights of women and girls around the world and “will not resile from this mandate, especially in relation to access to safe and legal abortion for all women”.

Unsplash/Gayatri Malhotra
Protesters demonstrate against US Supreme Court decision to criminalize a women's right to abortion.
♦ Receive daily updates directly in your inbox - Subscribe here to a topic.
♦ Download the UN News app for your iOS or Android devices. 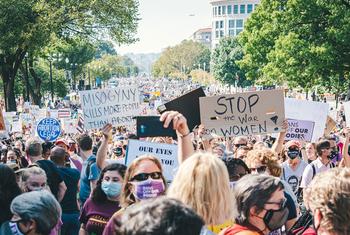 Friday’s decision by the US Supreme Court which overturns the 50-year-old Roe v Wade judgement guaranteeing access to abortion across the United States, was described by the UN human rights chief as “a huge blow to women’s human rights and gender equality.”