Unsplash/Andrew Keymaster
Protestors at the March of Peace and Independence in Minsk, Belarus (file photo).

The deterioration of human rights in Belarus continues to engulf the country in a climate of fear and arbitrary rule, a UN-appointed independent human rights expert warned on Wednesday.

Presenting her annual report to the Human Rights Council in Geneva, Anaïs Marin, Special Rapporteur on the human rights situation in Belarus, pointed to Government policies that have systematically tightened legislation and restricted civil and political rights.

She said it was a trend that has continued in the two years since the UN rights office, OHCHR, condemned violent crackdowns against hundreds and thousands of protesters who contested the result of presidential elections held in August 2020.

#Belarus: "As a result of a massive campaign of persecution and liquidation, most Belarusian human rights defenders have been forced into exile for their safety," Special Rapporteur Anaïs Marin told the Human Rights Council.#HRC50 #HRDs pic.twitter.com/Rpinqpnlof

“While the world’s attention is focused on many crisis situations around the world, I am convinced that the human rights situation in Belarus must not be relegated to the background,” she added.

Neither free nor fair

The independent expert highlighted the constitutional referendum of 27 February as a recent example of the trend, noting that the process lacked transparency and the vote was marred by serious violations that could not be considered free and fair.

“The reform initiated through this referendum amounts to strengthening and systematizing the obstacles to the realization of human rights by Belarusian citizens,” Ms. Marin said.

“I am gravely concerned about arbitrary application of legislation that is already restrictive,” the expert said.

The UN expert pointed out that contrary to the Constitutional provision on capital punishment “as an exceptional punishment for particularly serious crimes”, the Criminal Code amendments had broadened its scope to include “planning” or “attempting” to commit what the State is defining as terrorist acts.

“I am extremely worried that broad and vague definitions of ‘terrorist acts’ could be interpreted to include acts aimed at the legitimate exercise of fundamental rights,” she stated.

In her report, the Special Rapporteur documented the legislation, policies and practices that have led to a “virtual annihilation” of independent non-governmental organizations, media, and cultural organizations.

According to the report, authorities have hampered the legitimate and critically important work of human rights defenders and lawyers through various forms of harassment.

“The shrinking of civic space has seen an unprecedented acceleration as a result of a systematic and deliberate policy to eradicate all actual or perceived challenge to the incumbent government,” the UN expert said.

She called on the international community to support and protect the human rights of Belarusian nationals who are compelled to leave their country due to State repression and intimidation.

“Systemic human rights violations and impunity for those crimes have engulfed Belarus in a climate of arbitrariness and fear,” the Special Rapporteur spelled out.

At the same time, she urged the authorities to immediately halt systematic human rights violations and promptly and independently investigate those that have occurred, to provide justice and remedies to victims and hold perpetrators of abuses accountable. 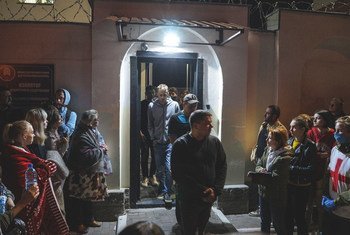 The Belarusian Association of Journalists (BAJ) was named on Tuesday as the winner of this year‘s UNESCO/Guillermo Cano World Press Freedom Prize, following the international jury‘s recommendation. 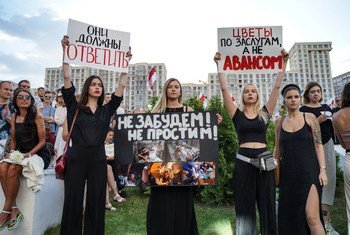 The Belarusian Government’s continuing crackdown on political opponents, civil society, journalists and lawyers has seen the fundamental human rights of tens of thousands violated, with no sign of any of the perpetrators being held accountable, the UN rights office, OHCHR, reported on Wednesday.