© UNDP/Oleksandr Ratushniak
Ukraine is suffering heavy damage to infrastructure that will be costly to repair or rebuild.

At least ten people have reportedly been killed by what Ukrainian authorities have said was a Russian missile strike on a crowded shopping centre, and attack which the UN condemned on Monday as “utterly deplorable”.

Ongoing shelling has led to homes being destroyed with many living in bomb shelters without access to basic services. To help those in need, @UNHCRUkraine in this convoy, delivered tarps, jerry cans + solar lamps for over 10k families. https://t.co/t4QJrH4gl9 pic.twitter.com/c70FLpee9l

At least ten people have reportedly been killed by what Ukrainian authorities have said was a Russian missile strike on a crowded shopping centre, and attack which the UN condemned on Monday as “utterly deplorable”.

The mall in the eastern city of Kremenchuk – a city which has largely escaped being targeted – was hit in the late afternoon, with reportedly 1,000 or more shoppers inside.

At least 40 were injured in the strike, said authorities, and the number of dead and injured is likely to rise. Footage from the scene showed buildings on fire and widespread destruction.

Civilians should not be targeted

United Nations Spokesperson, Stéphane Dujarric, told correspondents at the daily briefing in New York that although casualties still had to be verified, “whatever the number is any attack that hits a shopping mall, is utterly deplorable.”

“Any sort of civilian infrastructure, which includes obviously shopping malls, and civilians, should never ever be targeted”, he added.

Mr. Dujarric said there had been “disturbing reports of a new wave of airstrikes and shelling over the weekend and again today, with civilians having been killed or injured. Homes, health facilities and other civilian infrastructure were reportedly damaged.”

In a statement issued later in the day,  Osnat Lubrani, UN Resident Coordinator for Ukraine, said she was appalled at news of the airstrike on the mall.

"My thoughts and my heart are with the families and loved ones, of the people that have been killed, with those injured, and with the people of Kremenchuk and Ukraine, that had to witness another tragic event."

She said it was one more example "of the massive suffering that Russia’s war on Ukraine is causing on the people of this country."

During the weekend, the capital, Kyiv, was hit again, and a residential building was damaged, with some people trapped in the debris, he added.

“Loss of life, injury, destruction of homes across Ukraine, wreak havoc in the lives of individuals, families, communities”, said Ms. Lubrani, in a tweet on Sunday. “Civilians must be protected wherever they are.”

Desperation in the Donbas

Meanwhile in the Donbas region on the front lines between the invading Russian forces and Ukrainian defenders, fighting has continued, with UN humanitarians facing “tremendous challenges” reaching civilians, “who are facing increasing needs”, said Mr. Dujarric.

“The challenges are not only due to insecurity, but also to lack of access due to administrative restrictions imposed by the parties.

We once again stress that the parties are obliged under international humanitarian law to protect civilians and civilian infrastructure.”

The UN Crisis Coordinator for Ukraine, Amin Awad, tweeted at the weekend that as humanitarian needs grew, the UN would “continue to scale up and work side by side, with the Ukrainian Government and its people.” 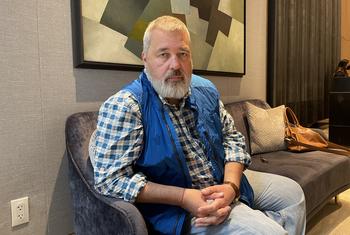 The Nobel Peace Prize winner Dmitry Muratov who auctioned off his gold medal to raise money for child refugees on Monday, has told UN News that the record-breaking sale of $103.5 million proved that “sometimes humanity can come together, and show solidarity”. 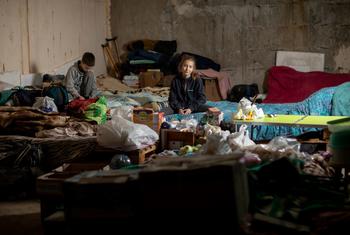 The UN Special Adviser on the Prevention of Genocide briefed the Security Council on Tuesday, reinforcing concerns already voiced by other senior UN officials in the chamber, over “the heightened risks” of sexual violence, and trafficking, which are “significantly impacting women and children”, following the Russian invasion of 24 February.