© UNICEF/Sayed Bidel
A father and son walk amidst the wreckage of their home, destroyed during the earthquake whick struck Paktika Province, Afghanistan.

Emergency lifesaving aid relief continued to flow into quake-hit eastern Afghanistan on Friday, as UN humanitarians and partners rushed to help the most vulnerable communities.

One of the UN teams on the ground, the refugee agency UNHCR, transported tons of relief items into the provinces of Khost and Paktika, where several thousand houses were destroyed or damaged by the 5.9 magnitude quake that struck early on Wednesday.

Wednesday's deadly earthquake in Afghanistan was the worst to hit the country in 20 years.@UNHCRAfg is on the ground delivering lifesaving assistance to the people affected.Additional support is now deployed from Kabul. https://t.co/7wAKWSImyO pic.twitter.com/QbMeHqI8nZ

The latest tally from Thursday evening indicated that at least 1,036 people have been killed and more than 1,643 injured, in the worst earthquake to hit the country in two decades.

“At least 121 of these deaths were children and 67 of those injured were also children,” said Mohamed Ayoya, Representative for the UN Children’s Fund (UNICEF) in Afghanistan. “The total number of people killed or injured is not yet confirmed. Verification is ongoing and we expect these numbers [to be] going up in the hours and days to come.”

To ensure distribution to the most needy, UNHCR has set up three supply hubs in Giyan, Bermal and Spera districts, so that humanitarian support can be shifted to communities affected by the earthquake. Heavy rains have also swept across the region in recent days, compounding the misery, UNHCR warned.

UNICEF has also dispatched life-saving supplies, including 500 first aid kits, along with treatment for acute watery diarrhoea to help prevent the spread of waterborne diseases.

“Much more support is urgently needed to avert a humanitarian disaster in the affected areas,” said UNHCR spokesperson Shabia Mantoo, who noted that millions of people in the country face hunger and starvation, after four decades of conflict and instability.

“Already some 24 million Afghans are in need of humanitarian assistance due to the hunger and economic crisis, lack of development aid, and the impact of the changeover in government authorities 10 months ago,” Ms. Mantoo told journalists in Geneva.

Across Afghanistan, some 3.5 million people have been displaced by conflict and violence, and another 1.57 million have had to leave their homes because of climate shocks.

© UNICEF/Sayed Bidel
A one-year-old girl rests in an emergency health clinic after being pulled from the rubble of her collapsed home, which was destroyed during the earthquake which struck Paktika Province, Afghanistan.
♦ Receive daily updates directly in your inbox - Subscribe here to a topic.
♦ Download the UN News app for your iOS or Android devices.

From the Field: Afghan earthquake survivors look to rebuild their lives 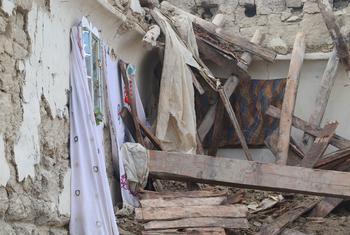 The devastating earthquake on Wednesday is just one of several emergencies facing Afghanistan, and continued dialogue with the Taliban de facto authorities remains the only way to address ongoing challenges in the country, the Security Council heard on Thursday. 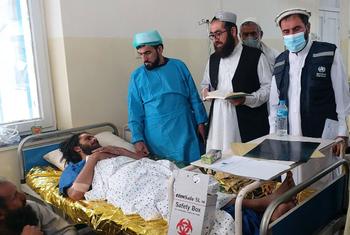 The UN and partners have rushed to support Afghanistan following a devastating earthquake that hit two provinces in the east of the country early on Wednesday morning.