Sargassum seaweed has blighted many of the beaches on Barbados for several years. Joshua Forte, a local entrepreneur, is convinced that it can be turned into a valuable commodity, and turned into highly effective, organic compost.

In 2014, Mr. Forte started Red Diamond Compost, a biotech business that focuses on research, development, and the commercialization of organic and biologic soil treatment and crop protection solutions made primarily from organic environmental hazards, such as sargassum seaweed. 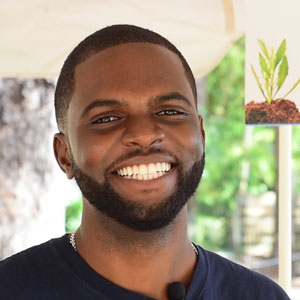 Mr. Forte is recognized as a national and regional expert in the field of climate-smart environmental management.

“I started getting interested in organic compost in 2009, at a time when I became seriously ill, and was in bed for 10 hours a day. I came across someone online, who was talking about how nutrients and the right foods can improve your health.

I tried changing my diet and, in a one-week period, I got a huge burst of energy, that I had never felt before.

I started to dig in deeper, and researched food and nutrition, and how it affects the body. I saw a contrast between the way that much of our food is produced in Barbados, with the focus on synthetic fertilizers and toxic chemicals. I also saw that there was a rise in the number of young people with type two diabetes or obesity.

In Barbados, toxic chemicals used in agriculture are killing the beneficial organisms, the life in the soil. A scientist at the university here even put out a report, which said that the microbial life here is completely decimated.

Red Diamond
Flowers grown with the help of organic Red Diamond compost, made with saragassum seaweed in Barbados.

‘The problem was much bigger than me’

I realized that the problem was much bigger than just me, and that we really need to do something about the way we're producing food. I needed to look at developing a business in this area, and that's where the idea of Red Diamond compost began.

I had my eye on producing seaweed fertilizer further down the road. But I was having some challenges with scaling up. Around that time, we had a huge influx of sargassum, and I saw the raw material just coming up to the shores, readily available. So, I decided to switch gear and just focus on developing a product out of seaweed.

Red Diamond
Tomatoes grown with the help of organic Red Diamond compost, made with saragassum seaweed in Barbados.

From the start, when we did some trials with peanuts, we saw freakish results in terms of the growth: the small test plot we used was getting around four times the amount of peanuts that you would normally get.

Then we started getting reports from farmers that were taking our compost and using it, and some of them were seeing these kinds of drastic results with other crops. We also discovered that the compost enhanced the flavour of the food. Since we kicked off in 2017, we have been operating in that R&D stage, and we’re working on getting the equipment we need in order to scale up.

For most people in Barbados, sargassum is a problem, but for me it’s truly a gold mine. I often go out harvesting on the beaches, early in the morning, and I think, wow, all of this is free, for me.

The formulation of the compost is now at an ideal stage, and some of our early adopters have been knocking on our doors to try to get it. They're really excited.” 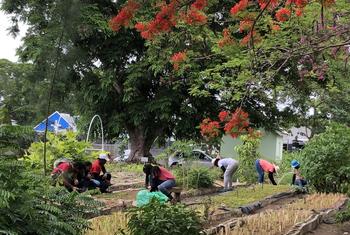 Since the 1980s, a UN Environment Programme (UNEP) convention has been in place, dealing with pollution issues affecting the wider Caribbean region. Since then, the climate crisis has been added to the risks. Christopher Corbin, the acting coordinator for the UNEP Cartagena Convention Secretariat, told UN News that the focus of the Convention is shifting from policy to local action.