WHO Afghanistan
WHO teams are supporting local health workers in saving lives and taking care of people affected by the earthquake in Afghanistan.

The UN and partners have rushed to support Afghanistan following a devastating earthquake that hit two provinces in the east of the country early on Wednesday morning.

At least 1,000 people have been killed, according to media reports, and numbers are expected to rise.  Nearly 2,000 homes reportedly were also destroyed and scores of people displaced.

UN Secretary-General António Guterres said he was saddened to learn about the tragic loss of life, noting that Afghans were already reeling from the impact of years of conflict, economic hardship and hunger.

“The United Nations in Afghanistan is fully mobilized. Our teams are already on the ground assessing the needs and providing initial support,” Mr. Guterres said in a statement.

“We count on the international community to help support the hundreds of families hit by this latest disaster. Now is the time for solidarity.”

Four districts in Patika province - Gayan, Barmala, Naka and Ziruk - as well as Spera district in Khost province, have been affected.

The earthquake registered at a depth of 10 km, OCHA said, and was reportedly felt in neighbouring provinces including Kabul, home to the country’s capital, as well as in Islamabad, Pakistan, and India.

© UNICEF Afghanistan
Damage is seen in the Spera district, in Khost province after a devastating earthquake hit eastern Afghanistan in the early morning of 22 June 2022.

🗺️SHAKE MAP: seismic intensity scale (Mercalli) from today's 5.9 magnitude #earthquake.🔴At only 10km depth, it was felt strongly in areas in red below, where damages &amp; casualties are most likely concentrated.🆘Life-saving search and rescue efforts are ongoing.#Afghanistan pic.twitter.com/5UGv6st2TW

Afghanistan’s Ministry of Defense is leading response efforts, OCHA said.  The authorities have dispatched five helicopters to Paktika province to facilitate medical evacuations, and more than 45 ambulances.  A medical team was also sent to Gayan district.

OCHA is coordinating the emergency response on behalf of UN agencies and humanitarian partners.

“Everybody is responding in a very concise manner,” said Dr. Ramiz Alakbarov, UN Humanitarian Coordinator in Afghanistan, speaking via videoconference to journalists in New York.

A rapid assessment of the situation is underway, and he estimated that $15 million will be required to respond to immediate needs.

Dr. Alakbarov, who is also UN Deputy Special Representative in Afghanistan, reported that mobile teams have already reached all locations.

“Of course, as the UN we do not have… specific equipment to take people from under the rubble. This has to rely mostly on the efforts of the de facto authorities, which also have certain limitations in that respect,” he said.

The UN was already mounting one of the largest humanitarian operations in the world in Afghanistan, where nearly 20 million people, roughly half the population, are going hungry.  Therefore, sufficient personnel were already on the ground to be deployed immediately.

So far, around 10 tonnes of essential medical supplies and medicines have been shipped to the affected areas. This aid includes 30 emergency health kits and 50 surgical health kits.

Teams of surgeons, medical doctors and several medical specialists have also been dispatched.  Food and tents are also being delivered, and affected people are being directed to regional hospitals.

In a post on Twitter, the World Health Organization (WHO) stated that “within a few hours” its teams were supporting local health workers in saving lives and taking care of those affected by the disaster.

Rescue operations and humanitarian support are being carried out in a mountainous area near the border with Pakistan, and amid unfavourable weather conditions, following snow, rain and falling temperatures.

“We are concerned about not just non-food items and getting people into shelters and providing medical supplies, but also preventing water-borne diseases,” said Dr. Alakbarov, adding “and that could be a very, very unwelcome scenario.”

WHO Afghanistan
A shipment of 9.8 tonnes and 95 cubic meters of medical supplies are on the way to the earthquake affected areas of Afghanistan. These include 30 emergency health kits, 50 surgical kits & other meds to treat the wounded at hospitals.

The UN Children’s Fund (UNICEF) reported that it has dispatched several mobile health and nutrition teams to provide first aid to the injured.

“The de facto authorities have requested the support of UNICEF and other UN agency teams who are joining efforts to assess the situation and respond to the needs of the affected communities,” he said.

“We stand in solidarity with the children and families affected during this difficult time.”

Meanwhile, the World Food Programme (WFP) is gathering data to direct its 239-strong fleet of trucks to deliver to the needy.

WFP currently provides food to some 800 distribution sites across all 34 provinces in Afghanistan, one of the UN agency’s most urgent emergencies.

The UN refugee agency, UNHCR, has deployed staff to the most affected areas in Pakitika and Khost provinces from its field office in the city of Gardez, capital of Paktia province.

“It is heart-breaking to see this tragedy unfolding in Afghanistan on top of the ongoing humanitarian crisis that Afghans are going through every day,” said Filippo Grandi, UN High Commissioner for Refugees.

“This tragedy highlights once again that Afghans need and deserve the world’s solidarity and support,” he added.

In New York, the President of the UN General Assembly, Abdulla Shahid, underlined his solidarity with families who have been impacted by the earthquake.

He urged UN Member States "to support ongoing humanitarian efforts to alleviate the suffering from this unforeseen tragedy." 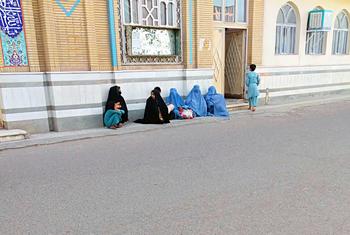 The Afghanistan people are experiencing some of “the darkest moments” in a generation the UN human rights chief told Human Rights Council on Wednesday.