© WHO/Chadin Tephaval
An elderly woman sits alone on a bench near a pond in Thailand.

Every year, one in six people aged 60 years and older experience some form of abuse – a trend that is expected to continue with rapid population ageing in many countries, the World Health Organization (WHO) said on Wednesday.

The UN agency and partners are highlighting the issue in the context of World Elder Abuse Awareness Day, observed annually on 15 June, and have issued a publication outlining five key priorities for response.

Elder abuse is a violation of human rights.  It includes physical, sexual, psychological and emotional abuse, but also financial and material abuse, abandonment, neglect, and serious loss of dignity and respect.

“Abuse of older people is an injustice, which can have serious consequences, including premature mortality, physical injuries, depression, cognitive decline and poverty,” said Etienne Krug, Director of WHO’s Department of Social Determinants of Health.

The global population is greying as the number of people aged 60 and above will more than double in the coming decades, rising from 900 million in 2015 to around two billion in 2050.

Like many other forms of violence, elder abuse has increased during the COVID-19 pandemic, WHO said. Furthermore, two in three staff in nursing homes and other long-term care facilities admitted to committing abuse over the past year.

Despite the growing issue, abuse of older persons remains largely absent from the global health agenda, the agency said.

The new guide calls for tackling elder abuse as part of the UN Decade of Healthy Ageing, which runs through 2030 and is aligned with the last 10 years of the Sustainable Development Goals (SDGs).

Combatting ageism is a top priority as it is a major reason why abuse of older people receives scant attention, while more and better data is needed to raise awareness of the problem.

Countries must also develop and scale up cost-effective solutions to stop abuse, and to make the “investment case” on how addressing the issue is money well spent.  Relatedly, more funds are needed to tackle the problem. 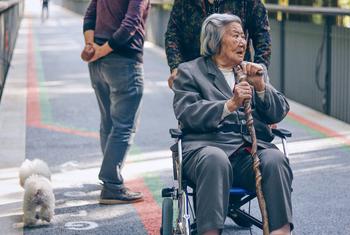 The basic rights of older persons need to be protected today, more than ever before, said the UN human rights chief on Monday, but existing legal safeguards render them, in effect, “invisible”.