The international community must increase pressure on Myanmar ‘s military rulers in the wake of their decision to move ahead with death sentences against four individuals, including two prominent opponents of the regime, UN independent human rights experts said on Friday.

Special Rapporteurs Thomas Andrews and Morris Tidball-Binz, fear the development could signal the start of a spate of executions in a country which has not carried out capital punishment in more than 30 years.

“The illegitimate military junta is providing the international community with further evidence of its disregard for human rights as it prepares to hang pro-democracy activists,” they said.

The military seized power in Myanmar in February 2021. Since then, at least 114 people have reportedly been sentenced to death, including 41 in absentia, according to the experts.

Last week, the junta announced it would execute four people whose appeals had been rejected following closed-door trials.

They include former legislator Phyo Zeya Thaw and veteran activist Kyaw Min Yu, known as Ko Jimmy, who were sentenced to death by a military tribunal in January on treason and terrorism charges.

Phyo Zeya Thaw is a former member of parliament with the National League for Democracy, the party of imprisoned leader Aung San Suu Kyi, overthrown in the military coup.  Ko Jimmy is a leader of the 88 Generation activist group that stood up to the regime of former dictator Ne Win.

“The junta’s announced decision to execute the activists illustrates how the military seeks to use all apparatuses of the State to persecute those that oppose its attempt to return Myanmar to military authoritarian rule,” the UN experts said.

In the face of increasing human rights violations, they called for the international community, and countries serving on the UN Security Council in particular, to exert greater pressure on the military.

“Without imposing serious costs on the military for its attacks on fundamental rights, we should expect increasing numbers of these death penalty pronouncements from the junta,” they said.

“The international community - chiefly Member States and the Security Council - must demonstrate that these actions will not go unpunished and do more to target the military’s needs for money, weapons and legitimacy.”

Under a March 2021 Martial Law Order, the death penalty can be applied for 23 vague and broadly defined offenses, most notably for treason, “which in practice means any criticism of the military”, the UN experts said.

The four individuals were tried and convicted in military tribunals, and reportedly without access to legal counsel during their rejected appeals, which is in violation of international human rights law.

“In today’s Myanmar, fair trial and due process guarantees simply do not exist. The junta’s thumb is firmly upon the scales of justice and under these circumstances, imposing and enforcing the death penalty is especially heinous,” they stated.

Without recognising the junta’s legitimacy, the Special Rapporteurs called on the military leaders to immediately and permanently halt the imposition of the death penalty and commute all capital sentences handed down so far.

“Where capital punishment is not yet abolished, under no circumstances can the death penalty ever be applied as a sanction against the legitimate exercise of human rights, such as freedoms of opinion and expression, assembly and association,” they said.

The experts recalled that the imposition of the death penalty was taking place alongside the military’s extrajudicial killings of civilians, now estimated at nearly 2,000 deaths, including during massacres, crackdowns on protestors, and airstrikes against civilian locations.

“The world must not lose sight of the fact that these death sentences are being meted out in the context of the military murdering civilians nearly every day in its widespread and systematic attack on the people of Myanmar,” they said.

Special Rapporteurs and independent experts are appointed by the UN Human Rights Council to monitor and report on specific country situations or thematic issues.

UN calls for probe into killing of WHO driver

And in another development involving the UN in Myanmar, Secretary-General António Guterres has called for a full and transparent investigation into the killing this week of a driver with the World Health Organization (WHO) in the country, his Spokesperson said on Friday.

Myo Min Htut was shot dead while riding his own motorcycle, at around 5 pm on Wednesday.  The incident occurred in Mawlamyine Township, Mon State, located in the south of the country.

“The Secretary-General expresses his condolences to the bereaved family and his ongoing concern for the safety and security of UN staff and all the people of Myanmar living and working in conflict-affected areas. He calls for a full and transparent investigation into the incident and for the perpetrators to be brought to justice,” said UN Spokesperson Stéphane Dujarric.

Shocked & deeply saddened by the death of our staff member in #Myanmar, Mr Myo Min Htut. On behalf of @WHO, I'm sending our heartfelt condolences to his loved ones.We condemn all forms of violence, & expect an impartial investigation & the perpetrators to be held accountable. https://t.co/us4mrDfOaU

In a tweet, WHO chief Tedros Adhanom Ghebreyesus said he was shocked and deeply saddened by the death of the staff member.

“I'm sending our heartfelt condolences to his loved ones,” he wrote on Thursday, while also calling for an investigation.

Myo Min Htut had worked with WHO for nearly five years.

The exact circumstances surrounding his killing currently remain unclear, according to the top UN humanitarian official in Myanmar, Ramanathan Balakrishnan.

“During these difficult times, against significant odds, the United Nations continues to stay and deliver essential humanitarian and development support for the people of Myanmar”. 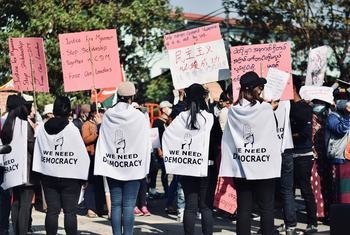