© Michele Cattani
A soldier from Burkina Faso stands guard along the border with Mali and Niger during a military operation against terrorist suspects.

While the number of deaths from terrorism has declined, the overall threat is far from over, particularly in Africa, UN Secretary-General António Guterres said in New York on Wednesday.

Mr. Guterres was addressing the latest meeting of the UN Global Counter-Terrorism Coordination Compact, which brings together more than 40 UN agencies, Member States and other partners.

Today, the 8th meeting of the @UN Global #CounterTerrorism Coordination Compact Committee held a strategic discussion on “Strengthening international and regional cooperation to address the increasing terrorist threat in Africa” with @antonioguterres#UNiteToCounterTerrorism pic.twitter.com/OUnjOJQjWf

The terrorism threat to Africa is increasing, he told participants.

“Groups like Al-Qaida, Da’esh and their affiliates are continuing to grow in the Sahel and make inroads into Central and Southern Africa.  They are exploiting power vacuums, longstanding inter-ethnic strife, internal weaknesses and state fragilities,” he said.

In conflict-affected countries, such as the Democratic Republic of the Congo, Libya and Somalia, terrorism has intensified cycles of violence, fuelling further instability, undermining peace efforts, and setting back development goals.

Meanwhile, in largely peaceful countries, such as Mozambique and Tanzania, terrorists are now seeking to exploit and manipulate societal grievances and mistrust in governments.

Despite these challenges, Mr. Guterres was convinced that progress is possible, based on his visit last month to Borno State in northern Nigeria.

Formerly a stronghold of the extremist group Boko Haram, the region is now on the road to reconciliation and reintegration.

The Secretary-General stressed that the international community cannot effectively address terrorism without tackling the conditions conducive to its spread, such as weak institutions, inequalities, poverty, hunger, and injustice.

The UN’s Counter Terrorism Strategy takes an integrated and holistic approach to the issue, which calls for investing in health, education, protection, gender equality and justice systems accessible to all.

“It means creating truly democratic systems and processes, so every person can have a voice in the future of their communities and countries - and trust that their voices will be heard and reflected,” he said.  “It means placing human rights and rule of law as the foundation of our work.”

Mr. Guterres said the UN Counter-Terrorism Compact will continue to support countries in their counter-terror efforts, including through technical assistance, capacity-building, and in helping to build institutions that focus on people and are grounded in human rights and the rule of law.

The Compact is the largest coordination framework across the UN’s three pillars of work: peace and security, sustainable development, and human rights and humanitarian affairs.

It was developed following the establishment of the UN Office of Counter-Terrorism (UNOCT) in June 2017, considered the Secretary-General’s first major institutional reform after taking office that January.

In his opening remarks, the UN Under-Secretary-General for Counter-Terrorism, Vladimir Voronkov, underscored the threat in Africa.

“Increased terrorist activities, both in conflict and non-conflict settings, have continued to fuel chaos and the death of innocent civilians. This amplifies inter-communal tensions and humanitarian crises, and undermines state authority and development,” he said.

“The magnitude of the challenge is further compounded by complex relationships between terrorists, armed groups and criminal networks, as well as the political upheaval caused by recent coups d’état.”

Mr. Voronkov stressed that the transnational nature of terrorism requires closer international cooperation with regional organizations and partners on the ground, including the African Union, which goes hand-in-hand with UNOCT’s recently launched Programme Offices in Kenya and Morocco.

He also welcomed the two newest members of the Compact family: the UN Investigative Team to Promote Accountability for Crimes Committed by Da’esh (UNITAD) and the Financial Action Task Force (FATF).

Ghada Waly, Executive Director of the UN Office on Drugs and Crime (UNODC), highlighted how her staff is working with partners to assist African countries in promoting counter-terrorism responses.

Examples include ongoing support to Nigeria to strengthen investigation, prosecution and due process in terrorism cases, especially in the northeast where Boko Haram is active.

UNODC will soon launch a new Global Programme to Prevent and Counter Terrorism aimed at contributing to implementation of the UN Counter-Terrorism Strategy, she said.

It will focus on outcomes that include strengthening terrorism prevention measures, with active and equal participation of women girls, young people, and civil society, and fostering accountable criminal justice institutions that uphold human rights.

Nearly half of world’s terror victims are African, with organised crime increasingly entrenched 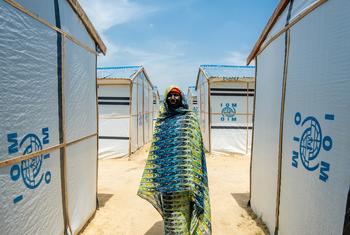