© WFP/Saleh Hayyan
A family shares a meal in Yemen with food provided by the UN World Food Programme (WFP).

Ripple effects from the war in Ukraine have generated a severe cost-of-living crisis which no country or community can escape, UN Secretary-General António Guterres said on Wednesday at a press conference to launch the latest report on the conflict’s impacts on food security, energy, and financing.

An estimated 1.6 billion people in 94 countries are exposed to at least one dimension of the crisis, with around 1.2 billion living in “perfect-storm” countries severely vulnerable to all three dimensions, the policy brief by the Global Crisis Response Group (GCRG) has revealed.

The impact of the war in Ukraine on food security, energy &amp; finance is systemic, severe &amp; speeding up.We must act now to save lives &amp; livelihoods over the next months &amp; years.It will take global action to fix this global crisis. We need to start today. https://t.co/j3qZwVry32

The UN chief said the message is clear and insistent: countries must act now to save lives and livelihoods.

“Three months into the Russian invasion of Ukraine, we face a new reality,” he told reporters.

“For those on the ground, every day brings new bloodshed and suffering.  And for people around the world, the war is threatening to unleash an unprecedented wave of hunger and destitution, leaving social and economic chaos in its wake.”

Furthermore, the crisis is amplifying the consequences of other challenges confronting countries, such as the climate emergency, the COVID-19 pandemic, and inequalities in resources for post-pandemic recovery.

The increase in hunger since the start of the war could be higher and more widespread, according to the report.

The number of severely food insecure people doubled from 135 million prior to the pandemic, to 276 million over just two years. The ripple effects of the war could push this number to 323 million.

UN trade chief Rebeca Grynspan, who co-leads the GCRG stream on finance, presented the report.  She said the world is in “a race against time”, and inaction will be more costly than finding solutions.

The cost-of-living crisis could spark a “cycle of social unrest leading to political instability”, she warned.

Some 60 per cent of workers worldwide have already lower real incomes than before the pandemic, meaning families are having to choose whether to skip meals, keep children in school, or pay medical bills, for example.

“The current food crisis may rapidly turn into a food catastrophe of global proportions in 2023,” said Ms. Grynspan, head of the UN trade and development agency, UNCTAD.

Higher energy costs and trade restrictions on the fertilizer supply from the Black Sea region have caused fertilizer prices to rise even faster than food prices.

She said if the war continues, and grain and fertilizer high prices persist into the next planting season, shortages of other basic foods such as rice will occur, affecting billions more worldwide.

© UNDP Nigeria
A farmer tends his crops in a field in Nigeria.

The report makes clear that the war’s impact on food security, energy and finance is systemic, severe, and speeding up, the UN Secretary-General said.

Although ending the deadly and devastating conflict is the only way to stop the “gathering storm”, the UN chief called for immediate action on two fronts: stabilizing global food and energy markets and supporting poorer countries in the crisis.

He said Ms. Grynspan and the UN’s humanitarian chief, Martin Griffiths, will coordinate two task forces on finding a “package deal” that would allow for Ukrainian-produced food to be safely and securely exported through the Black Sea, while Russian food and fertilizers would have unimpeded access to global markets.

The top officials have already begun working closely with parties in the two countries, and in Turkey, the European Union, and the United States, though the Secretary-General refrained from further comment to avoid jeopardizing the chances for success.

“Ukraine’s food production, and the food and fertilizer produced by Russia, must be brought back into world markets – despite the war,” he said.

Stressing that there is no solution to the global crisis without also solving the economic crisis in the developing world, the UN chief called for greater resources to help the world’s poorest countries and communities at this time.

“Governments must be able to borrow the money they need to keep their economies afloat and their people thriving,” he said.

“The global financial system must rise above its shortcomings and use all the instruments at its disposal, with flexibility and understanding, to provide support to vulnerable countries and people.” 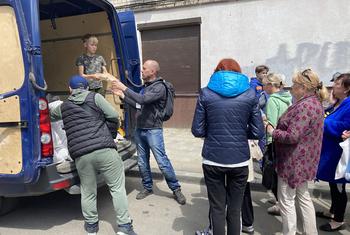 Ukraine: WFP teams up with Uber, in boost for pinpoint aid deliveries

If you’re a Ukrainian living in a hard-to-reach part of a city under fire, the chances of the UN being able to get lifesaving aid to you and your family are improving, thanks to an innovative partnership announced on Wednesday, between the UN World Food Programme (WFP), and global transportation platform, Uber.