Pramila Patten, the Secretary-General’s Special Representative for Sexual Violence in Armed Conflict, recalled her recent visit to Ukraine and outlined the elements of a recently signed Framework of Cooperation on the Prevention and Response to Conflict-Related Sexual Violence, which seeks to strengthen accountability and combat those abhorrent crimes.

“Too often have the needs of women and girls in conflict settings been side-lined and treated as an afterthought,” she said, welcoming that fact that the newly signed Framework makes them an explicit priority.

Recalling the Council’s many resolutions – backed up by international law – prohibiting the use of sexual violence as a tactic of war, the Special Representative highlighted the gaping chasm between those commitments and the situation of many women around the world.

“Painfully, my visit cast into stark relief the gap that still exists between the aspiration of prevention expressed by this Council through the robust normative framework that has been established over the past decade, and the reality on the ground for the most vulnerable,” she said.

As of 3 June, the Human Rights Monitoring Team of the UN High Commissioner for Human Rights had received reports of 124 alleged acts of conflict-related sexual across Ukraine.

Women and girls constituted most of the alleged victims, while some reporting instances of sexual violence were also men and boys.

A national hotline on domestic violence, human trafficking and gender-based discrimination has been set up, and has received multiple shocking reports ranging from gang rape, to coercion, where loved ones are forced to watch an act of sexual violence committed against a partner or a child.

Against that backdrop, Ms. Patten urged humanitarian actors to prioritize support for survivors of sexual and gender-based violence as a life-saving component of their work.

She also warned against waiting too long to act.

“An active battle-ground is never conducive to accurate ‘book-keeping’ […] if we wait for hard data and statistics, it will always be too late,” she said, calling on the international community to mobilize immediately.

“We do not need hard data for a scaled-up humanitarian response, nor for all parties to put in place preventive measures,” she added.

Detailing the provisions of the recently signed Framework of Cooperation, she said it will help strengthen cooperation between those working to combat and deter sexual violence in Ukraine.

It also aims to reduce the risk posed by human traffickers to those fleeing Ukraine, and to provide services to victims.

However, she cautioned that the protection challenges facing the nearly 6.8 million people who have fled the country are unprecedented, and the heightened risks of trafficking in persons – including for purposes of sexual exploitation and prostitution – have been “alarmingly evident” since the start of the conflict.

Against that backdrop, she urged the Council and the global donor community to stand in solidarity with Ukrainian authorities and UN entities to support the Framework’s implementation.

“It is crucial to ensure that the level of political focus, as well as the allocation of resources for a comprehensive response, is commensurate with the scale and complexity of the problem,” she said. 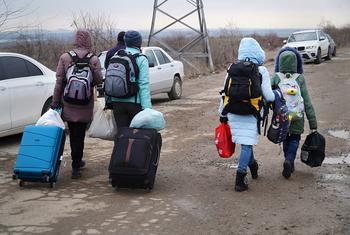 Women’s rights do not end when wars begin, a senior UN official said in Ukraine on Tuesday, outlining measures towards ensuring justice and accountability for sexual violence committed during the conflict in the country.