MINUSMA/Harandane Dicko
The UN peacekeeping mission in Mali, MINUSMA, has supported peace and reconciliation efforts in the country.

Secretary-General António Guterres has strongly condemned a deadly attack on Wednesday against a UN Peacekeeping logistics convoy near the town of Kidal in northern Mali.

For roughly an hour, the convoy came under direct fire from suspected members of a terrorist group using small arms and rocket launchers.

Four Jordanian peacekeepers serving with the UN Mission in Mali, MINUSMA, were injured in the attack, one of whom died from his injuries after being evacuated.

The Mission reported that the attack was the fifth incident to occur in the Kidal region in just one week, UN Spokesperson Stéphane Dujarric told journalists in New York.

“It is a tragic reminder of the complexity of the mandate of the UN Mission and of its peacekeepers, and the threats peacekeepers face on a daily basis,” he said.

"The Secretary-General recalls that attacks targeting United Nations peacekeepers may constitute war crimes under international law", said the UN Spokesperson. "He calls on the Malian authorities to spare no effort in identifying the perpetrators of this attack so that they can be brought to justice swiftly.

"The Secretary-General reaffirms the determination of the United Nations to support the people of Mali in their quest for peace and security."

Mr. Guterres also sent his deepest condolences to the family of the deceased peacekeeper, and to the people and Government of Jordan. He has also wished a prompt recovery to those injured.

The Secretary-General’s Special Representative in Mali, El Ghassim Wane, underlined that despite the difficulties, MINUSMA remains determined to support the people and Government of Mali in their quest for peace and security.

"I strongly condemn this attack, which is part of the desperate efforts of terrorist groups to hamper the quest for peace in Mali and the implementation of MINUSMA's mandate," he said in a statement, translated from French.

The UN Security Council also issued a statement condemning the attack "in the strongest terms", paying tribute to all peacekeepers, who risk their lives in service.

The Council called on the transitional Government of Mali to swiftly investigate the attack, bring the perpetrators to justice "and keep the relevant troop-contributing country informed of the progress."

MINUSMA this week published its quarterly human rights report which showed that 812 cases of violations and abuses were recorded in the first three months of the year.

The figure represents a 150 per cent increase compared to the previous quarter.

The Malian Armed Forces have stepped up military operations to combat terrorism, with occasional support from foreign military elements.

Some of these operations have resulted in serious allegations of violations of human rights and international humanitarian law, according to the report.

Overall, some 320 violations were attributed to the Malian defense and security forces, compared to 31 in the last quarter of 2021.

Meanwhile, UN relief chief, Martin Griffiths, was in Mali this week to draw attention to the deteriorating humanitarian situation there and the need for greater support.

People are reeling from the impact of years of conflict, deep poverty, climate shocks and mounting insecurity.

Currently, 7.5 million require humanitarian assistance, and 4.8 million do not have access to sufficient food.

Furthermore, it is estimated that a staggering 1.8 million people will be acutely food insecure during the lean season from June to August of this year.

During his four-day visit, Mr. Griffiths met with the transitional Government in the capital, Bamako.

He also travelled to Mopti, in the centre of the country – one of the regions where Islamist rebels have been operating for years following a failed coup - and met with internally displaced persons in Socoura village.

“Incredibly resilient women shared with me the difficulties they face,” he said. “Some had lost their husbands to violence and had to flee their homes at great risk. With the help of local communities, authorities and humanitarian partners, some are now able to get back on their feet, for example by running small businesses.”

The UN humanitarian affairs office, OCHA, reported that the crisis in the Central Sahel is rapidly deteriorating, with over 13 million people in Burkina Faso, Mali and Niger needing assistance.

Mr. Griffiths concluded his mission to Mali on Tuesday, marking his first visit to the region since being appointed a year ago.

While he left concerned about the impacts the crisis will have on millions, he stressed there is also “hope for turning this around, for building on the huge potential of youth, the traditional way of mediating conflicts through dialogue and bringing peace to Malians across the country.” 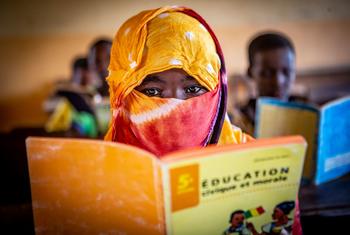 The Sahel region of Africa should be considered a region of opportunity, despite the “multiple crises” that people there are enduring; that’s according to Annadif Khatir Mahamat Saleh, Special Representative of the UN Secretary-General for West Africa and the Sahel. 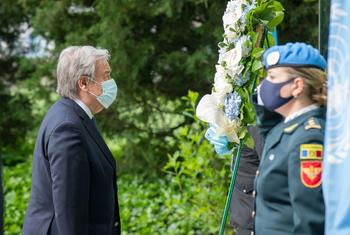 The United Nations paid tribute to the men and women serving under its flag in some of the most dangerous places in the world during a ceremony in New York on Thursday to mark the International Day of UN Peacekeepers.