On day three of her official mission to China, top UN rights official Michelle Bachelet described having a “valuable opportunity” to highlight rights issues and concerns with President Xi Jinping and other senior officials, the first such visit by a UN rights chief since 2005.

In a tweet on Wednesday, the UN High Commissioner for Human Rights, Ms. Bachelet, indicated that she had been able to “discuss directly” important issues via videolink with the country’s premier, without providing further information about her talking points.

.@mbachelet: Meetings with President Xi &amp; senior officials have been valuable to discuss directly human rights issues &amp; concerns in China &amp; global. For development, peace &amp; security to be sustainable: human rights, justice, inclusion of all, without exception, must be at the core

“I have been committed to undertaking this visit, the first visit by a UN Human Rights High Commissioner to China in 17 years, because for me, it is a priority to engage with the Government of China directly…on human rights issues, domestic, regional and global,” Ms. Bachelet said, in comments shared by her Office, OHCHR.

She added: “For development, peace and security to be sustainable – locally and across borders – human rights have to be at the core.”

In opening remarks to President Xi, the UN rights chief also stressed that China had “a crucial role to play within multilateral institutions in confronting many of the challenges facing the world currently”, comments echoed in an address to students at Guangzhou University.

These challenges included “threats to international peace and security, instability in the global economic system, inequality, climate change and more”, Ms. Bachelet explained, adding that she looked forward “to deepening our discussions on these and other issues”.

As with other countries, the High Commissioner also offered China technical assistance to “accompany efforts to strengthen the promotion and protection of human rights, justice and the rule of law for all without exception”.

The development came as Ms. Bachelet prepared to visit the western Xinjiang Uyghur Autonomous Region on Wednesday, where UN-appointed independent rights experts have raised serious concerns about the alleged detention and forced labour of Muslim Uyghurs.

China has strongly denied the allegations over its treatment of the Uyghur minority, hundreds of thousands of whom who have been reportedly held in so-called re-education” facilities or forcibly transferred to factories in Xinjiang or other Chinese provinces.

Also on Wednesday – halfway into her six-day mission to China - the UN rights chief delivered a lecture to students at Guangzhou University.

At a time of “uncertainty and unpredictability”, a “human rights education is so crucial” for everyone, Ms. Bachelet insisted.

It offered the opportunity to shape “our own social, economic, cultural and political reality”, she continued, adding that it provided “concrete solutions to the challenges people face”.

Despite numerous global threats, from COVID-19 to climate change, conflict and growing inequalities, the High Commissioner told her audience that “the tremendous power of youth” was one of several “beacons of hope”.

“A fundamental ingredient for youth to be able to play that role is an open civic space where they can voice their opinions and seek change,” Ms. Bachelet said, adding that she had been inspired by youth activist movements who had challenged “discrimination, injustice and inequalities”.

She added: “Young people are influencing debates of national and international importance and prompting social change - including by demanding a seat at the table and holding governments and businesses to account for their inaction.”

Echoing the UN Secretary-General’s Call to Action for Human Rights and Our Common Agenda blueprint for multilateral action, which underlines how young people must have the opportunity to take part in discussions that affect them, Ms. Bachelet highlighted the need for “an open civic space where they can voice their opinions and seek change”.

Returning to the topic of the inalienable right to participate in open dialogue, she also added: “When various sectors of society are brought into discussions, are included in debate, it allows for a deeper understanding of the issues. With different voices at the table, States can better identify gaps in laws and policies, to make sure they are more just.”

Upon arriving in Guangzhou on Monday where she was greeted by Vice Foreign Minister Ma Zhaoxu, Ms. Bachelet told journalists that she expected to discuss “some very important and sensitive issues” over the course of her visit, to help to “build confidence”.

She is scheduled to hold a press conference at the end of her six-day mission. 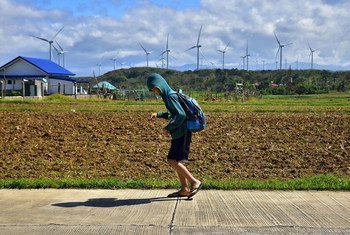 How can the world come together to radically change the way it produces and uses energy, as part of efforts to hold back climate change and to ultimately give humanity a more secure future on planet earth? That’s the question that over one hundred countries, organizations and businesses will be discussing at the United Nations on Friday at the High-level Dialogue on Energy, the first meeting of its kind in 40 years. 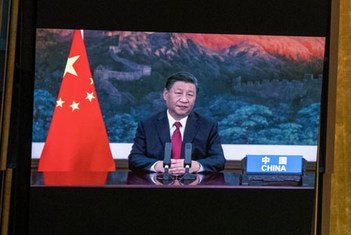