Climate change is set to increase pressure significantly on people’s access to water and sanitation unless governments do more to prepare key infrastructure now, the UN warned on Friday.

“Climate change is already posing serious challenges to water and sanitation systems in countries around the world,” said Thomas Croll-Knight, spokesperson for the UN Economic Commission for Europe (UNECE).

According to UNECE and the World Health Organization’s Regional Office for Europe (WHO/Europe), despite being a priority aligned with the Paris Climate Agreement, plans to make water access possible in the face of climate pressures, “are absent” in the pan-European region.

And “in most cases” throughout the region of 56 countries, there is also a lack of coordination on drinking water, sanitation and health, intergovernmental discussions in Geneva heard this week.

“From reduced water availability and contamination of water supplies to damage to sewerage infrastructure, these risks are set to increase significantly unless countries step up measures to increase resilience now,” warned Mr. Croll-Knight.

It is estimated that more than one third of the European Union will be under “high water stress” by the 2070s, by which time the number of additional people affected (compared to 2007) is expected to surge to 16–44 million.

And globally, each 1°C increase caused by global warming is projected to result in a 20 per cent reduction in renewable water resources, affecting an additional seven per cent of the population.

Meanwhile, as governments prepare for the next UN climate conference (COP 27) in November and the UN 2023 Water Conference, UNECE painted a potentially grim picture moving forward in parts of Europe.

From water supply and sewerage infrastructure damage to water quality degradation and sewage spillage, impacts are already being felt.

And challenges in ensuring adequate water supply in the Netherlands have increased, while Spain struggles to maintain a minimum drinking water supply during drought periods.

Despite water management adaptation initiatives in many Nationally Determined Contributions (NDCs) and National Action Programmes (NAPs) under the Paris Agreement, governance mechanisms and methods for integrating water and climate are absent, leaving the interface of drinking water, sanitation and health is worryingly unaddressed, in most cases.

Lacking adequate governance mechanisms, stepping up measures under the Protocol on Water and Health – a unique multilateral agreement serviced by UNECE and WHO/Europe – can play a key role

It can support developing more options for the inclusion of water, sanitation, and health in NDCs and NAPs and ensure that national and sub-national drinking water supply and sanitation strategies, integrate a clear rationale towards mitigating climate change, and risk analysis.

Previously, Secretary-General António Guterres had called on all regional countries to accede to the Protocol and fully apply its provisions – a call echoed by Pedro Arrojo-Agudo, Special Rapporteur on the human rights to safe drinking water and sanitation, who referred  to the Protocol as a key instrument linking public health and the environment.

UNECE
Examples of climate change impacts on the Water, Sanitation and Hygiene (WASH) sector.
♦ Receive daily updates directly in your inbox - Subscribe here to a topic.
♦ Download the UN News app for your iOS or Android devices. 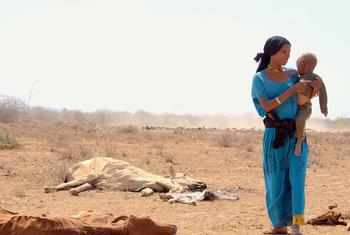 Humanity is “at a crossroads” when it comes to managing drought and accelerating ways of slowing it down must happen “urgently, using every tool we can”, said the head of the UN Convention to Combat Desertification (UNCCD) on Thursday, calling for a global commitment to support drought preparedness and resilience. 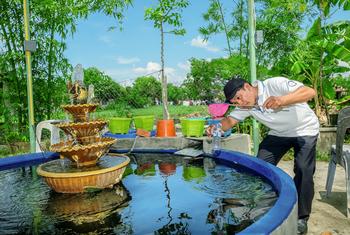 An urgent call to protect health and mitigate the climate crisis was issued by the UN health agency on Wednesday, to mark World Health Day on Thursday.