The UN Human Rights Council met in special session on Thursday in Geneva, prompted by increasing concern over atrocities committed against civilians, linked to Russia’s invasion of Ukraine on 24 February.

Amid a mounting number of reports and testimonies pointing to possible war crimes in Ukraine particularly in areas controlled until recently by Russian forces, UN High Commissioner for Human Rights Michelle Bachelet said that the pattern of abuses continued to be caused “by the use of explosive weapons with wide area effects in populated areas, such as shelling from heavy artillery, including multiple launch rocket systems, and missile and air strikes”.

Russian forces were likely responsible for most casualties, but so too Ukrainian troops - albeit to a far lesser extent - the UN rights chief said, in a video message.

Highlighting the latest harrowing findings of UN investigators in the Kyiv and Cherniviv regions, Ms. Bachelet told the forum that 1,000 civilian bodies had been found in the Kyiv region alone. Some had been killed in hostilities, but others appeared to have been summarily executed.

“These killings of civilians often appeared to be intentional, carried out by snipers and soldiers. Civilians were killed when crossing the road or leaving their shelters to seek food and water. Others were killed as they fled in their vehicles.”

She added: “In the village of Katiuzhanka, Kyiv region, a young couple, their 14-year-old daughter and a grandfather were shot by Russian soldiers while trying to drive to their house. The parents were killed, while the child received two gunshot wounds.”

Still others died because of stress to their health caused by hostilities and the lack of medical aid, the High Commissioner continued, describing how people had been forced to spend weeks in basements because they were threatened by Russian soldiers “with abuse or death” if they tried to leave.

Following Ms. Bachelet’s remarks and noting that “the Russian Federation is not in the room”, Federico Villegas, President of the Human Rights Council gave the floor to Emine Dzheppar, First Deputy Minister of Foreign Affairs of Ukraine.

Russia’s absence followed its suspension from the Council by the UN General Assembly last month. As a concerned country, Russia could nonetheless have participated in the proceedings, at which Member States prepared to consider a draft resolution calling for an end to the war and ongoing international support for accountability for its victims, many of whom continue to endure an ongoing humanitarian emergency.

Raped in front of his mother

“These have been 10 weeks of sheer horror to the people of my country,” said the Ukrainian representative. “Ten weeks of time of deep suffering for every Ukrainian family without exception.”

Addressing the Council from Kyiv and holding up a sheet of paper showing a dark mass of thick black lines that had been drawn by a victim of sexual violence, Ms. Dzheppar alleged that children had been “raped in front of their mothers, like the 11-year-old boy who was raped in front of his mother; he actually lost the ability to speak after, and the only way how he communicates with the world are the black lines, and this is the first picture that he drew working with a group of psychologists who are trying to help him recover.”

Since the beginning of the Ukraine war, UN-appointed independent rights experts known as Special Procedures have highlighted deep concerns over violations of international humanitarian and international human rights law, including the UN Charter.

These include an alert over the apparent ill-treatment of some of the hundreds of thousands of migrant workers and foreign nationals in Ukraine.

© UNICEF/Siegfried Modola
Children wait on a train in Ukraine for evacuation to Poland in early April 2022.

“Colleagues had also noted with serious concern reports of people of African descent and racial and ethnic minorities being subjected to discriminatory treatment as they flee Ukraine,” said Chair of the Coordination Committee of Special Procedures, Victor Madrigal-Borloz, insisting that “the lives of all people of Ukraine are in danger, including ethnic, national, linguistic and religious minorities”.

The conflict had affected regions where different ethnic groups had lived together for years, the rights expert continued, before issuing a fresh alert over dangers of reporting on the war:

“My colleagues referred to numerous reports that journalists are being targeted, tortured, kidnapped, attacked and killed, or refused safe passage from the cities and regions under siege.”

The special session – the Council’s 34th since it began work in 2006 – also featured an early update from the top rights probe into abuses in Ukraine that was set up in March, at the request of a majority of the forum’s Member States.

“While not a strictly judicial instance, one of the Commission's tasks is to identify, where possible, individuals and entities responsible for violations or abuses of human rights or of international humanitarian law, or other related crimes,” said Erik Mose, Chair of the Independent International Commission of Inquiry on Ukraine.

Among the countries expressing solidarity for Ukraine, French Ambassador Jerome Bonnafont reiterated his country’s condemnation for Russia’s invasion of its neighbour.

“We have said it before and we repeat: there is one aggressor in this war, it is Russia; it is not NATO, nor Europe, nor Ukraine. Let us demonstrate today the solidarity of the international community with the people of Ukraine, and to all those affected by the consequences of the Russian aggression.” 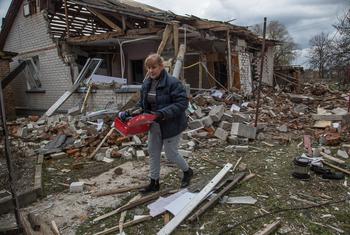 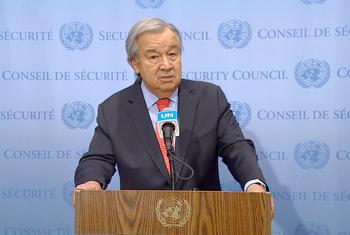 Secretary-General António Guterres said on Sunday that he was appalled by an attack on a school in Bilohorivka, eastern Ukraine, where many people were sheltering from the ongoing fighting.