UN News/Elizabeth Scaffidi
More than 25 years after the Bosnian war ended, remnants remain in the village of Čvaljin, Bosnia and Herzegovina.

Amidst rising tensions, a months-long political stalemate and increasing speculation about yet another conflict in Europe, the international community must stand firm behind a peaceful, unified Bosnia and Herzegovina, the country’s UN envoy told the Security Council on Wednesday.

High Representative Christian Schmidt said that more than 26 years after the signing of the General Framework Agreement for Peace – known as the Dayton Accords – citizens are once again talking about the possibility of another conflict, posing the risk of inflammatory incidents.

“The conflict in Ukraine, not so far away, is a sobering reminder that even in the 21st century, another war on European soil is not an impossibility,” he stressed.

They include attempts to render national laws inapplicable, which would likely mean the Republika’s withdrawal from the country’s unified forces.

Emphasizing that such constitutional changes cannot be made unilaterally, they would threaten the territorial integrity of Bosnia and Herzegovina, he stressed the international community has a responsibility to defend the Dayton Accord and the rights of the country’s three constituent peoples.

The High Representative praised international support for Bosnia and Herzegovina’s unity, including through targeted sanctions by many Governments.

“We will not sit still while other seek to dismantle 26 years of peace, stability and progress,” he said.

Turning to the country’s potential membership in the European Union (EU) – a path that would help resolve grievances and foster peace and stability – he urged the bloc to keep its doors open to Bosnia and Herzegovina and the rest of the Western Balkan nations.

Meanwhile, fulfilling Agenda 5+2 and the European Council’s recommendations before membership can be considered, would help resolve grievances and foster lasting peace and stability, thereby improving the lives of every citizen of Bosnia and Herzegovina.

It would also help stem the ever-increasing flow of young people out of the country and provide hope for a brighter future, he said.

Šefik Džaferović, Chairman of the Presidency of Bosnia and Herzegovina, joined the Council meeting on behalf of his country.

Describing the High Representative’s report on the situation as an objective account, he agreed that for over 10 months, his country has been in a deep political crisis caused by the secessionist threats, blockade of institutions and other actions by Republika Srpska.

Noting that Bosnia and Herzegovina lacks a fully developed mechanism to prevent such secessionist activities, he called for the international community’s full support.

Considering the current geopolitical situation – “we feel the strong consequences of the aggression on Ukraine” – he echoed calls on the EU to respond positively to the nation’s request for candidate status.

At the meeting’s outset, several delegates expressed their reservations on hearing Mr. Schmidt brief in his capacity as High Representative.

Anna M. Evstigneeva, the Russian delegate, said Mr. Schmidt is a German citizen whose appointment was never authorized by the Council.

Echoing similar misgivings, China’s representative, Dai Bing said that while the situation in Bosnia and Herzegovina features a profound deadlock, all members of society – including Republika Srpska – have pledged to uphold the country’s national sovereignty and territorial integrity.

Describing the High Representative system as a relic from another time, he declared: “Picking sides by external forces will not help resolve differences between ethnic groups.”

He also warned against the imposition of unilateral sanctions, emphasizing the serious humanitarian impacts that the conflict in Ukraine is having on food security as well as lingering challenges caused by the COVID pandemic.

Click here to watch the debate in its entirety. 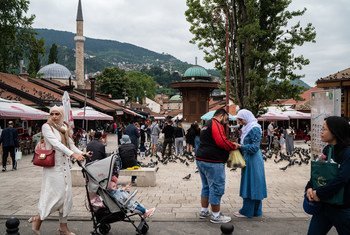 Thirty years after the siege of Sarajevo, the UN team in Bosnia and Herzegovina reiterated the importance on Wednesday of pursuing justice and reparation for victims, survivors and their family members.