The COVID-19 pandemic has shown how effective dialogue between employers, workers and governments, is the best way to strengthen safety and health at work, the International Labour Organization (ILO) said in a new report published on Thursday.

Learning from the pandemic might help prevent millions of deaths, according to the report, which was issued on the World Day for Safety and Health at Work.

Guy Ryder, the ILO Director-General, said occupational safety and health (OSH) remains at the forefront of national response even as countries continue to grapple with the impact of COVID-19, and uneven recovery.

“The lessons learned from this crisis about the importance of social dialogue in strengthening safety and health at the national and workplace level, need to be applied to other contexts. This would help reduce the unacceptable level of occupational deaths and disease that occur every year.”

The report, titled Enhancing social dialogue towards a culture of safety and health, found that during the pandemic, Governments that prioritized active participation of employers’ and workers’ organizations in OSH governance, were able to develop and implement emergency laws, policies and interventions.

Collaboration has been critical to ensuring these measures were both acceptable to, and supported by, employers and workers, meaning they were more likely to be effectively implemented in practice.

As a result, many countries have adopted legal requirements covering areas such as measures to prevent and handle COVID-19 cases in the workplace, to teleworking arrangements.

The report provided examples from countries such as Singapore, where changes to rules on vaccination took place after consultations and discussions among the partners. In South Africa, tripartite discussions led to amending measures targeting coronavirus spread in workplaces.

In some countries, dialogue between Governments, employers and workers at the national level has been followed by further consultation at the regional or sectoral level, so that policies might be adapted to specific contexts.

In Finland for example, trade unions and employers’ organizations worked with the government to develop measures for the tourism and restaurant sectors, while in Italy, dialogue led to the creation of detailed rules on telework in the banking sector, which outlined the right to privacy and the right to disconnect.

National tripartite OSH bodies have also played an important role in the fight against COVID-19, according to the report. These entities are usually composed of government representatives – for example, from the Ministry of Labour and other relevant ministries and institutions - as well as representatives from employers’ and workers’ organizations.

During the pandemic, many participated in the decision-making process at the national level.  They have also been involved in defining lockdown and restriction measures, return to work strategies, and other instructions or guidance aimed at mitigating impacts.

The report cited examples from countries, including the Philippines, where the two national tripartite bodies dealing with OSH were involved in the design and implementation of guidelines to ensure the quality of ventilation in workplaces and public transport as part of efforts to prevent and control the spread of COVID-19. 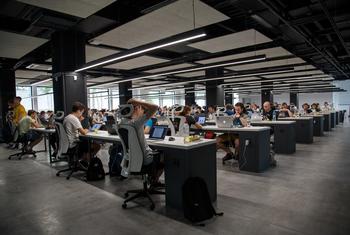