© UNICEF/Johnny Shahan
Children walk through a neighbourhood in Zabadani, rural Damascus, in Syria.

Although the war in Syria may not be making headlines lately, the international community must remain focused on achieving a comprehensive political solution to the conflict, UN Envoy for the country, Geir Pedersen, said on Tuesday in his latest briefing to the Security Council in New York.

Recalling that Syria is “a hot conflict, not a frozen one”, he listed some of the threats resulting from the war, including an uptick in airstrikes, intensified clashes in the northeast, “regular incidents between or involving international actors”, as well as terrorism.

.@GeirOPedersen #Syria is a hot conflict, not a frozen one… The conflict also still gives rise to threats to international peace and security of the first order… Syria is still among the greatest humanitarian crises of our era.

“The current strategic stalemate on the ground and Syria’s absence from the headlines should not mislead anyone into thinking that the conflict needs less attention or fewer resources, or that a political solution is not urgent.”

Syria also remains among the greatest humanitarian crises of this era, he said, and suffering is at its highest level since the war began 11 years ago.

“While the displacement caused by the war in Ukraine is tragically catching up, Syria remains the biggest displacement crisis in the world, with 6.8 million refugees and 6.2 million IDPs (internally displaced persons) – half the pre-war population, a whole generation born and brought up in displacement.”

Mr. Pedersen updated ambassadors on the work of the of the Syrian Constitutional Committee, whose efforts should contribute towards a peaceful solution to the war, and future political reform.

The Committee is formed from equal numbers of representatives from the Government, the opposition, and civil society, known as the “Middle Third”.

During its latest session, held in Geneva last month, delegations were expected to submit revised texts reflecting their discussions, and the revisions were to be discussed by Committee members on the last day.

“I can report that delegations offered at least some revisions to some of the texts presented. Some of these embodied amendments indicating an attempt to reflect the content of the discussions, and narrow differences. Still, others contained no changes.”

Mr. Pedersen has sent out invitations for the next Committee session, to be held from 28 May to 3 June. “In doing so, I have affirmed the methodology, including the expectation to submit revisions on the fifth day to reflect the content of the discussion, and I stress the importance of this expectation being fulfilled,” he said.

On the humanitarian front, the UN envoy called for expanding cross-line and cross-border assistance, and highlighted the need to address the plight of the tens of thousands of Syrians who remain detained, abducted or missing.

UN deputy humanitarian affairs chief, Joyce Msuya, who also briefed ambassadors, warned that “Syria is on the verge of becoming yet another forgotten crisis” even as millions there struggle each month to survive.

The economic crisis continues unabated, while food and fuel prices spiral, impacting delivery of water and sanitation, as well as other basic services.

“We simply do not have the money needed,” she said bluntly. “For far too many people, we are not able to provide the bare minimum in assistance. It is clear, we cannot continue business as usual. We must support Syrians in need to find a more sustainable path forward.”

In recent months, three cross-line convoys have delivered aid into northwest Syria, where more than four million people require aid, with hopes of further deployments in May.

While hailing this “important progress”, Ms. Msuya stressed it was modest when compared with the tremendous needs.

Regarding the situation in northeast Syria, she said the UN also should be given the space to coordinate humanitarian response from within the country from its hub in Qamishli.

Echoing the UN Secretary-General, Ms. Msuya urged the Security Council to “maintain consensus” on renewing its resolution on cross-border aid deliveries in July. 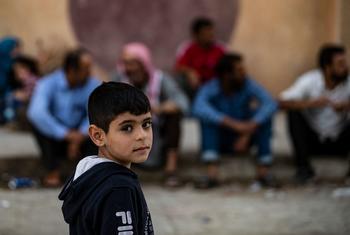 Twelve years into the war in Syria, thousands of families “remain in the dark” when it comes to the fates of their missing relatives, UN human rights chief Michelle Bachelet told the General Assembly on Friday.