The UN human rights office, OHCHR, on Friday called for a probe into Israel’s response to the escalating violence surrounding the Al Asqa Mosque compound in Jerusalem.

OHCHR Spokesperson Ravina Shamdasani stressed that the use of force in law enforcement operations is strictly limited and governed by international norms and standards.

“The use of force by Israeli police resulting in widespread injuries among worshippers and staff in and around the Al Aqsa Mosque compound must be promptly, impartially, independently and transparently investigated,” she told journalists in Geneva.

“Those responsible for any violations should be held to account, and policies and procedures on the use of force reviewed with a view to avoid any further violations.”

Last weekend, roughly 180 Palestinians, including at least 27 children, were injured by Israeli forces during tensions around the Al Aqsa Mosque compound, a site that is important to both Muslims and Jews.

OHCHR said the conduct of Israeli security forces, as captured in video, raised serious concerns of the widespread, unnecessary and indiscriminate use of force.

“A number of Palestinians, including elderly, women, children and at least one journalist, who did not appear to pose any threat to the Israeli security forces in any manner, were beaten with batons or shot with sponge-tipped bullets from close range,” said Ms. Shamdashani.

The Israeli police also reportedly arrested more than 470 people in Jerusalem  over the past weekend.

While all reportedly have been released, most were prohibited from entering the Al Aqsa Mosque compound, or the Old City of Jerusalem, in the coming weeks as a condition of release.

The latest developments occurred on Thursday morning, when Israeli police reportedly raided the yards of the Al Aqsa Mosque compound to push Palestinians out of the area.

Dozens were reportedly confined to the Al Qibli mosque, also on the compound, and six people were injured by sponge-tipped bullets.

More violence was reported overnight and into Friday morning, with a journalist, an elderly person, and a paramedic among those injured by Israeli forces.

Ms. Shamdasani said the tension in Jerusalem is also impacting other areas. This week, Palestinian armed groups launched six rockets and one mortar shell towards Israel.

In response, Israel struck several armed groups’ military sites across the Gaza Strip.  No casualties were reported in either location.

These developments follow weeks of violence in the occupied West Bank, including East Jerusalem, and in Israel. In the most serious attacks in Israel in many years, 12 Israelis and two foreigners were killed in incidents in Beersheba, Bnei Brak, Hadera and Tel Aviv.

Ms. Shamdasani said Israel’s intensified military operations in the West Bank, particularly in Jenin, and the use of firearms by Palestinian militants, place Palestinians there at high risk.

Israeli security forces have killed 19 Palestinians so far this month, including three boys and three women. Scores more have been injured. Raids and arrest operations across the West Bank have also intensified, raising serious concerns of excessive use of force, as well as ill-treatment and arbitrary arrests of family members of wanted people.

“Some of the killings, including in particular Israeli security forces shooting at a Palestinian woman in Husan on 10 April, raise serious concerns of excessive use of force and arbitrary deprivation of life,” said Ms. Shamdasani.

“We echo the call of the UN Secretary-General for calm and urge investigations where people have been killed or injured.”

Meanwhile, an independent UN human rights expert has called on the international community to urgently implement both short- and long-term steps to address the mounting violence.

“The past few weeks have seen a rising level of violence associated with Israel’s 55-year-old occupation of Palestine,” said Michael Lynk, UN Special Rapporteur for the situation of human rights in the occupied Palestinian territory.

“International inaction in the face of these new levels of violence will only encourage more of the same.”

Mr. Lynk stated "the level of violence required by Israel to maintain its occupation has been steadily increasing over the past 16 months."

Mr. Lynk reported that in 2021, incidents of settler violence towards Palestinians or their property was the highest since statistics were first collected in 2017. Last year also saw the highest number of  Palestinian homes demolished as a result of Israeli orders since 2016.

The rights expert outlined measures the international community should take, such as directing Israel to end the 15-year Gaza blockade; halting all settlements in the West Bank, including East Jerusalem; and removing checkpoints, permit restrictions and other barriers to Palestinian freedom of movement.

The Special Rapporteur also called for the international community to embark upon a rights-based peace process between Israel and Palestine, centred on international law and UN resolutions.

The end goal must be the rapid and complete end of the occupation, and the realization of Palestinian self-determination, he said.

“Only by providing a horizon of hope, through the international community’s meaningful demand that the occupation must fully end with all deliberate speed, can this alarming rise in violence be reversed.”

Special Rapporteurs like Mr. Lynk receive their mandates from the UN Human Rights Council, which is based in Geneva. 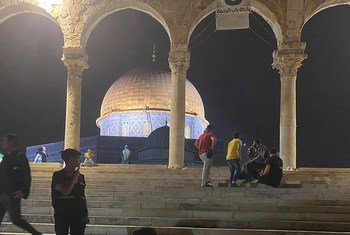 Senior UN officials, including the Secretary-General, António Guterres, have expressed concern over a spate of violent incidents at the al-Aqsa compound in Jerusalem, an important religious site for both Muslims and Jews.