UNDP Ukraine/Oleksandr Ratushnia
The village of Novoselivka, near Chernihiv, Ukraine has been heavily bombed.

UN rights chief Michelle Bachelet on Friday condemned the “horrors” committed against civilians in Ukraine as the World Health Organization (WHO) warned that it feared the worst in devastated areas of the country's east and south.

In an appeal to all parties to the conflict to respect internationally agreed rules of war, the High Commissioner for Human Rights said in a statement that “international humanitarian law has not merely been ignored but seemingly tossed aside”.

Russian armed forces have “indiscriminately shelled and bombed populated areas,” she added, “killing civilians and wrecking hospitals, schools and other civilian infrastructure, actions that may amount to war crimes”.

In the thick of a massive military build-up and clashes in the eastern region of the country, known as the Donbas, Ravina Shamdasani, spokesperson for the UN rights office, OHCHR, cautioned about a current new phase of the war.

“There already has been a bloodbath,” Ms. Shamdasani said. “We’re talking about 2,343 – at least 2,343 civilians – who have been killed and we’re talking about the summary execution of more than 300 civilians. We are very concerned, we’re very worried about what’s coming next.”

Evidence is mounting that war crimes have been committed, for the most part by Russian forces, the OHCHR spokesperson maintained.

“These include indiscriminate shelling and bombing of populated areas, summary execution of civilians. As I said though, the vast majority of violations by far are attributable to the Russian forces, so if we just look at the civilian casualties, 92.3 per cent of what we have managed to record were recorded in Government-controlled territories, so attributable to the Russian armed forces.”

During a mission to Bucha on 9 April, UN human rights officers documented the unlawful killing of some 50 civilians, including by summary execution.

“Almost every resident in Bucha [that] our colleagues spoke to, told us about the death of a relative, a neighbour or even a stranger,” Ms. Shamdasani said, quoting the High Commissioner. “We know much more needs to be done to uncover what happened there and we also know Bucha is not an isolated incident.”

During its investigations, the UN Human Rights Monitoring Mission in Ukraine (HRMMU) had received more than 300 allegations of killings of civilians in towns in the regions of Kyiv, Chernihiv, Kharkiv and Sumy, all under the control of Russian armed forces in late February and early March.

Underscoring that the true death toll is almost certainly much higher than what has been confirmed to date, Ms. Shamdasani added that “the scale of summary executions of civilians in areas previously occupied by Russian forces” was also emerging.

“The preservation of evidence and decent treatment of mortal remains must be ensured, as well as the psychological and other relief for victims and their relatives.”

The desperate situation for civilians caught up in the fighting continues to alarm humanitarian agencies and their partners, including WHO.

To date, the agency has still been blocked from reaching some of the hardest-hit areas in the east where it reported on Friday that the health system “has all but collapsed”.

In Luhansk oblast, “nearly all health facilities and hospitals…are either damaged or destroyed”, WHO spokesperson Bhanu Bhatnagar said from Lviv, western Ukraine.

“It’s absolutely essential that a safe passage is created quickly, we need a cessation of fighting for at least two days in order to move vital supplies in, but also to assess the health needs. We anticipate the worst.” 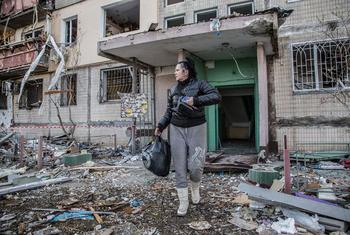 Over the past two months, Ukraine has seen “suffering, devastation, and destruction on a massive scale”,  the UN Crisis Coordinator for the country told journalists on Thursday, and echoed the Secretary-General in saying, “we must stop the bloodshed and destruction”. 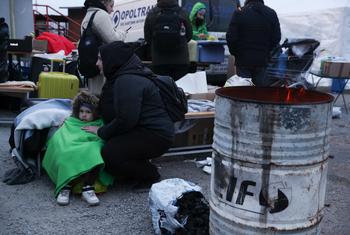 As five million people have already fled Ukraine and another seven million are displaced internally, UN Deputy High Commissioner for Refugees Kelly T. Clements urged the Security Council on Tuesday to ‘put aside’ its divisions and find a way to end the “horrific and senseless war”, now in its eighth week.