Thirty years after the siege of Sarajevo, the UN team in Bosnia and Herzegovina reiterated the importance on Wednesday of pursuing justice and reparation for victims, survivors and their family members.

The siege began after Bosnia and Herzegovina declared independence in the wake of the dissolution of the former Yugoslavia.

This was the longest blockade since the Second World War, with more than 12,000 people killed, and marked a key moment in the Bosnian War.

The UN Resident Coordinator for Bosnia and Herzegovina, Ingrid Macdonald, has met with survivors’ associations across the country.

Ms. Macdonald continues to spotlight the importance of countering the denial of atrocity crimes and glorification of war criminals, said UN Spokesperson Stéphane Dujarric, speaking during his daily briefing from New York.

“She said that such rhetoric perpetuates the suffering of survivors and families of victims and has no place in a democratic society,” Mr. Dujarric told journalists.

© UNICEF/LeMoyne
Women near the town of Kladanj, in Bosnia and Herzegovina (1995).

Ms. Macdonald has also appealed for political leaders to take measures to prevent and act upon all manifestations of hatred and discrimination.

They are also urged to ensure all people there live in an environment of mutual understanding, respect and dignity.

The UN has repeatedly spoken out against rising hate speech in the country, and in neighbouring Serbia, decades after the Bosnian War.

The conflict ended in December 1995 and was among the bloodiest fighting to occur in Europe during the last century.

Horrific crimes were committed, including ethnic cleansing campaigns such as the July 1995 massacre of thousands of Muslim men and boys in Srebrnica. 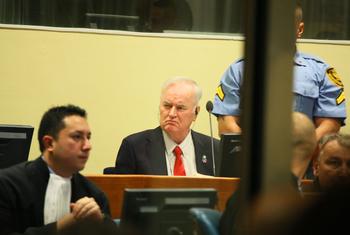 Authorities in Bosnia and Herzegovina, and in neighbouring Serbia, must condemn and refrain from any advocacy of national, racial or religious hatred, the UN human rights office, OHCHR, said on Friday.