End landmine scourge once and for all: Guterres

© UNICEF/Viktor Moskaliuk
A boy injured after the car he was travelling in ran over a landmine, is treated in a hospital in Lviv, Ukraine.

End landmine scourge once and for all: Guterres

Although more than 160 States have signed a landmark convention on banning landmines, more action is still needed to protect people from these “abhorrent weapons", UN Secretary-General António Guterres has said.

In his message for the International Day for Mine Awareness and Assistance in Mine Action, observed on Monday, he urged all countries to join the 1997 treaty.

4 April is #MineAwarenessDay.@UN &amp; @UNMAS are working towards a world free from the threat of landmines, explosive remnants of war and improvised explosive devices. #IMAD2022 #MineActionLearn more 👉 https://t.co/PbDNpYq43k pic.twitter.com/7qKPazDJNz

“Mines, explosive remnants of war and improvised explosive devices, continue to kill or injure thousands of people every year – many of whom are children,” he said.

Over the weekend, the UN children's agency, UNICEF,  reported that five children  - a girl and four boys - were killed on Friday when an explosive remnant of war detonated in Marjah District, Helmand Province. Another boy and girl were also injured.

Mohamed Ag Ayoya, UNICEF Representative in Afghanistan, warned that this was far from being an isolated case.

"In Afghanistan, in the last seven months, 301 children were either killed or injured by explosive remnants of war and landmines. The real figure is thought to be much higher," he said.

The Secretary-General recalled that exactly 30 years ago, activists united to launch the International Campaign to Ban Landmines and within five years, the Mine Ban Convention opened for signature.

Since then, more than 55 million mines have been destroyed, and more than 30 countries across the world have been declared mine-free. Casualties have also dramatically decreased.

“But the world is still rife with millions of stockpiled landmines and over 50 countries remain contaminated with these abhorrent weapons,” he said.

Mr. Guterres emphasized the need for greater protection for “people living under the shadow of explosive ordnance” in countries that include Syria, Somalia, Afghanistan, Myanmar, and beyond.

“In Ukraine, the legacy of a single month of war – in the form of unexploded ordnance, landmines, and cluster munitions – will take decades to tackle, threatening lives long after the guns fall silent,” he said.

‘An investment in humanity’

The Secretary-General called mine action “an investment in humanity”, adding that “it is a prerequisite for humanitarian relief efforts and the foundation of lasting peace and sustainable development.”

He called on all States to accede to the Convention without delay, adding that permanent members of the UN Security Council in particular, have a special responsibility.

The five countries with permanent member status are China, France, Russia, the United Kingdom, and the United States.

“On this International Day, let us build on past progress and rid the world of the scourge of landmines once and for all,” he said.

ICBL/Gwenn Dubourthoumieu
A 33-year old landmine survivor tries on a new prosthesis at the fitting and rehabilitation centre in Kabalaye, Chad.

Mine Awareness Day 2022 is being celebrated under the theme ‘Safe Ground, Safe Steps, Safe Home’. The UN Mine Action Service (UNMAS) explained the significance.

‘Safe Ground’ refers to the concept of clearing landmines from the earth to make it safe for development, while ‘Safe Steps’ has two meanings.  It highlights both the fear people feel moving about and not knowing if they will detonate one of these weapons, as well as the procedures used by deminers when approaching contaminated areas.

The final element, ‘Safe Home’, focuses on restoring the personal security of people and communities, in post-conflict settings.

“There is no place like home, and it is difficult to feel at home without security and community,” the agency said.

In Somalia, the theme highlights efforts made over the past decade to free the country from explosive hazards: from playground to pathway, from farmland to house, according to the UN team there.

Landmines continue to have a devastating impact on people’s lives and development. In 2020, 501 Somalis were killed or injured due to improvised explosive devices and explosive remnants of war. Casualties increased to nearly 670 the following year.

“The contamination by and from explosive remnants of war and landmines resulting from years of conflict in Somalia continues to have detrimental effects on safety and human security, and hampers development efforts,” said James Swan, the UN Secretary-General’s Special Representative for the country.

The envoy underlined the UN’s commitment to working with the Somali authorities and partners on mine action “which enables peacebuilding, humanitarian, and socio-economic development efforts while protecting civilians.”

International Day of Mine Awareness: Zeina's mission to save lives in Lebanon
♦ Receive daily updates directly in your inbox - Subscribe here to a topic.
♦ Download the UN News app for your iOS or Android devices. 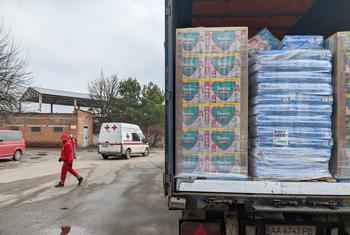 UN humanitarian agencies and partners on the ground in Ukraine, were able to reach the town of Sumy, in the country’s northeast on Thursday, but access to the besieged and stricken city of Mariupol, where thousands of civilians are believed to have died amidst the brutal Russian bombardment, has yet to be given.