YPN for UNOCHA
A family in the Al Dhale'e camp for people displaced by the conflict in Yemen.

Tens of thousands of civilians have been killed in more than seven years of fighting between Yemeni forces, backed by a Saudi coalition, and Houthi rebels.

UN Envoy Grundberg: “The 2-month truce came into effect at 7 p.m. tonight. I hope this truce will give Yemenis a chance to celebrate the holy month of #Ramadan in peace, safety and tranquility": https://t.co/xuosQQUQzCFull text of the agreement: https://t.co/bxktnsO6a9 pic.twitter.com/HNh2vwW5AU

Mr. Grundberg issued a statement welcoming the positive reactions to the ceasefire, which began at 7 p.m., local time, and coincides with the start of the holy month of Ramadan.

“The success of this initiative will depend on the warring parties’ continued commitment to implementing the truce agreement with its accompanying humanitarian measures,” he said.

“I also hope the goodwill that we saw from all sides in public will translate into long-term de-escalation of inflammatory media rhetoric and hate speech.”

The UN envoy had announced the truce on Friday, which calls for a halt to all offensive ground, aerial and naval military operations in Yemen and across its borders.

Fuel ships will also be allowed to enter into ports in the Hudaydah region, and commercial flights will operate from the capital, Sana’a, to predetermined destinations in the region.

The parties have further agreed to meet to open roads in Taiz and other governorates.

The truce can be renewed once the two months are up, provided the sides agree.

Mr. Grundberg stressed the importance of building on the agreement to restore trust between the sides and resume a political process towards ending the conflict.

He also offered heartfelt congratulations to the Yemeni people on the start of Ramadan, adding “I hope the onset of this truce will give Yemenis a chance to celebrate the holy month in peace, safety and tranquility.”

Speaking on Friday, UN Secretary-General Antonio Guterres said the truce must be a first step to ending the country's devastating war.

“A halt to the fighting, coupled with the entry of fuel ships, and the easing of restrictions on the movement of people and goods in, out and within the country, will contribute to building trust and creating a conducive environment to resume negotiations for a peaceful settlement of the conflict,” he said. 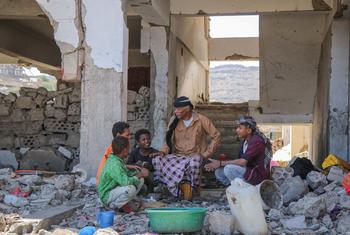 A two-month truce in Yemen which goes into effect on Saturday must be a first step in ending the county’s devastating war, UN Secretary-General Antonio Guterres said on the eve of the ceasefire.