UNEP/Olle Nordell
UNEP Patron for Oceans, Lewis Pugh, prepares for a swim in waters of South Georgia, as king penguins look on. The island lies in the path of large icebergs drifting northward from Antarctica.

Antarctica, the world’s coldest, windiest and driest continent, has often been referred to as a stable ‘sleeping giant’, but increasingly extreme temperatures, together with unusual rain and ice shelf shifts, remind us that it must not be taken for granted, the UN Weather Agency (WMO) warned on Friday.

During the third week of March, research stations in East Antarctica recorded unprecedented temperatures up to 40 degrees Celsius above the month’s average.

The Russian station Vostok, in the middle of the Antarctic ice plateau, hit a provisional high of -17.7℃ (0.14°F), smashing the previous record of -32.6℃ (-26.68°F), while Dome Concordia, an Italian-French research station on top of the Antarctic plateau, 3,233 meters above sea level, experienced its highest ever temperature for any month.

Just a day before, weather stations had recorded rain on the coastal area further upstream, and even temperatures way above 0°C.

“Rainfall is rare in Antarctica but when it occurs, it has consequences on ecosystems - particularly on penguin colonies - and on the ice sheet mass balance.

“Fortunately, there are no longer penguin chicks at this time of the year but the fact that this happens now in March is a reminder of what is at stake in the peripheral regions: wildlife, stability of the ice sheet”, French scientists Etienne Vignon and Christoph Genthon told the World Meteorological Organization (WMO).

© UNSPLASH/66 North
A Tabular Iceberg in the Weddell Sea, Antarctica..

The experts added that while the warm temperature at Dome Concordia (Dome C) is a source of excitement for climatologists, “rains at the coast in March is a source of concern for everyone”.

According to WMO, the warmth and moisture were driven primarily by what’s known as an atmospheric river – a narrow band of moisture collected from warm oceans.

Scientists say it is still too soon to say definitively whether climate change is the cause.

One for the record book

“This event is rewriting record books and our expectations about what is possible in Antarctica. Is this simply a freakishly improbable event, or is it a sign of more to come? Right now, no one knows,” tweeted Dr Robert Rohde, Lead Scientist at Berkeley Earth.

The events happened just after Antarctic Sea ice reached its minimum extent after the summer melt, and fell below two million square kilometers (772,000 square miles) for the first time, since satellite records began in 1979.

The Antarctic Peninsula (the northwest tip near to South America) is among the fastest warming regions of the planet, almost 3°C over the last 50 years. Remote East Antarctica, by contrast, has until now been less impacted.

Record high temperatures, rain and the collapse of an ice shelf in East #Antarctica have prompted concern about the role of #climatechange in the coldest and driest part of the world.Roundup here: https://t.co/9bYjYHo4ofImage @CopernicusEU Sentinel2 🛰️ pic.twitter.com/bmfFjrRJZ2

Just ahead of the heatwave, East Antarctica’s Conger ice shelf – a floating platform the size of Rome or New York City – broke off the continent on March 15, 2022. Its collapse was caught on satellite and made headlines across the world.

WMO explains that it is too soon to say what triggered the collapse, but that it appears unlikely to have been caused by melting at the surface level.

But although is relatively small in size, and unlikely to have any global significance, the collapse of the ice shelf is ‘another warning sign’.

“As glaciologists, we see the impact of global warming on Antarctica in increasing ice loss with time. And what happens in Antarctica does not stay in Antarctica…Global warming is making events like this more likely. And as more and more ice shelves around Antarctica collapse, ice loss will increase, and with it global sea levels”, a scientific article cited by the agency warns.

It adds that while not everything that happens in nature is due to global warming alone, the collapse of the Conger ice shelf, among others, is the continuation of a “worrying trend”.

According to the Intergovernmental Panel of Experts on Climate Change (IPCC), both major ice sheets – Greenland and Antarctica – have been losing mass since at least 1990, with the highest loss rate during 2010–2019. They are projected to continue to lose mass

WMO warns that as a result of the melting of the ice sheets and glaciers, the rate of global sea-level rise has increased since satellite altimeter measurements began in 1993, reached a new record high in 2021.

The Antarctic ice sheet is up to 4.8km thick and contains 90% of the world’s freshwater, enough to raise sea level by around 60 metres were it all to melt.

Lives at risk if wireless technology demands are not held in check: UN weather watchdog 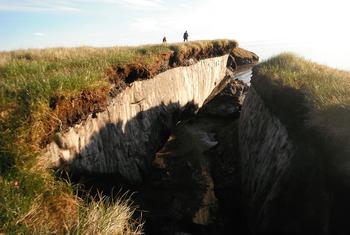 Earth’s permafrost is thawing, and indigenous communities in the Arctic and scientists around the world say it’s high time this alarming loss of ground ice receives the global attention – and dedicated research – it deserves. As this phenomenon reshapes landscapes, displaces whole villages, and disrupts fragile animal habitats; it also threatens to release dangerous microorganisms and potential carbon emissions that have been locked in ice for thousands of years.