Humanitarians must have full and unimpeded access to children arbitrarily held in detention centres in northeast Syria, a group of independent UN human rights experts said on Friday.

Their statement comes in the aftermath of a deadly jailbreak in January at a facility in the Al-Hasekeh region, led by ISIL combatants in an attempt to free detained counterparts.

The jail is controlled by Kurdish forces and at the time of the siege, housed roughly 5,000 men, including up to 700 boys, some as young as 10.

Many were brought to Syria by their families, while others were born there to families allegedly associated with ISIL.

“We are extremely concerned that since the January 2022 attack, the fate and whereabouts of at least 100 of those boys remain unaccounted for, which raises serious concerns relating to their right to life,” the UN experts said.

“Some of these cases might amount to enforced disappearance, and where children are concerned, States – and de facto authorities – must undertake special measures of protection that reflect their vulnerability.”

They added that although the authorities in charge of the prison have been calling for foreign nationals there to be immediately repatriated, they are still obligated under international law, to investigate the circumstances under which the missing boys disappeared.

“Harm to these children must be identified, and those responsible must be held accountable to prevent impunity,” they said, while “States of nationality” – where they hold citizenship - are also obligated to protect the boys.

The UN experts also expressed concern over the lack of clear information around the number of minors actually held in the prison, prior to the attack.  They feared this could be used to refuse to acknowledge their current fate and whereabouts.

Meanwhile, detention conditions in the prison have worsened, they added, with severe cases of malnutrition. Many of the boys detained were seriously injured during the jailbreak and are not receiving critical medical treatment.

The experts said conditions of detention do not appear to comply with standard minimum rules for the treatment of prisoners, including those relating to housing, access to water, and to articles necessary for health and cleanliness.

Boys are being held in overcrowded collective cells of 20 to 25 people, with limited access to safe drinking water, and concerns about COVID-19 spread remain high.  Additionally, contact with their families, which was already sporadic prior to the attack, had stopped.

The experts described the children as victims of terrorism and very serious violations of human rights and humanitarian law.

“They are considered guilty by association, discriminated against and punished. No attention is paid to their best interest. They deserve protection and care not violence and abandonment by the international community.”

The UN experts urged authorities to immediately reinstate full humanitarian access to all persons in the prison, which is a necessary initial step to determine the wellbeing, fate and whereabouts of the detained boys, and to ensure their access to adequate healthcare.

They further called for all sides in northeast Syria to ensure the protection of children and to prevent further harm from occurring to them.

Children should also be immediately repatriated, they added, or an international solution found if this cannot occur.

“It is clear that the current situation cannot be reconciled with any position that States are effectively addressing international threats to peace and security, including countering terrorism and violent extremism,” they said.

The experts who issued the statement were all appointed by the UN Human Rights Council in Geneva.  They are neither UN staff, nor do they receive a salary from the Organization. 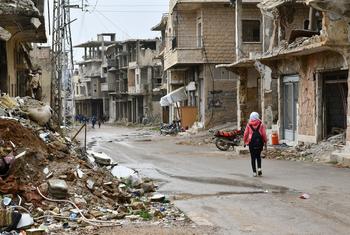 The committee tasked with drafting a new Syrian constitution - and thereby setting the country on a fresh trajectory to peace and stability - resumed its difficult and halting deliberations this week, against the backdrop of fresh urgency as the conflict marked its eleventh anniversary this month.