© UNDP Lebanon
A woman installs a solar panel on rooftop in Lebanon.

Mr. Guterres’s comments came as he unveiled his new initiative to develop stronger standards for “net-zero” pledges by partners below the national government level, in the fight against climate change.

“Despite growing pledges of climate action, global emissions are at an all-time high,” Mr. Guterres warned. And they continue to rise, he said, adding that “the latest science shows that climate disruption is causing havoc in every region already.

The key objective is to stop global temperatures from rising 1.5 degrees Celsius above pre-industrial levels – as the international community agreed in Paris in 2015.

But the UN chief warned that the world was losing the race to reduce global temperature rise.

Governments had the biggest responsibility to achieve net-zero emissions by mid-century – “especially the G20” industrialized nations he said - before calling on “every business, investor, city, state and region to walk the talk on their net-zero promises”.

Net-zero promises must be matched by concrete #ClimateAction.Today I am launching my Expert Group to push business, investors, cities and regions to walk the talk on net-zero pledges. https://t.co/y8doh65wGs pic.twitter.com/IYdRAxrWZG

The IPCC (Intergovernmental Panel on Climate Change) has demonstrated that nearly half of humanity is already in the danger zone”, he said. “If we don’t see significant and sustained emissions reductions this decade, the window of opportunity to keep 1.5 alive will be closed – and closed forever.

“And that will be disaster for everyone.”

He praised the commitment being made at Thursday’s meeting to create a new brains’ trust to make the commitments on net zero, a reality, in the form of the new advisory High-Level Expert Group.

At COP26, last year, the Secretary-General flagged the need for “more credible and robust standards and criteria for measuring, analyzing and reporting on the net-zero pledges by non-State entities.

“Today we take a step towards meeting that need and ensuring the highest standards of environmental integrity and transparency. To avert a climate catastrophe, we need bold pledges but matched by concrete, measurable action.”

He stressed that net-zero standards at every level of activity, and strengthened accountability around implementing those goals, would deliver real and immediate emissions cuts.

The Expert Group will make recommendations before the end of the year addressing four areas, he told the launch:

He noted that the Group of experts was gender-balanced and geographically diverse, “with deep experience across government, business, the global financial system, civil society and academia.”

They will be working in a personal capacity, “and I expect them to consult widely, extensively and transparently to hear the perspectives and views of all stakeholders”, the UN chief concluded.

© IMF/Tamara Merino
A worker at an electric bus charging terminal in Santiago, Chile.
♦ Receive daily updates directly in your inbox - Subscribe here to a topic.
♦ Download the UN News app for your iOS or Android devices. 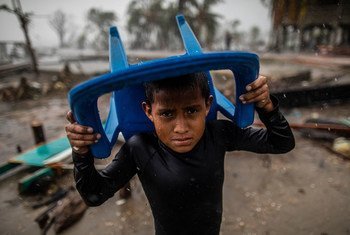 UN scientists on Monday delivered a stark warning about the impact of climate change on people and the planet, saying that ecosystem collapse, species extinction, deadly heatwaves and floods are among the "dangerous and widespread disruptions” the world will face over the next two decades due to global warming. 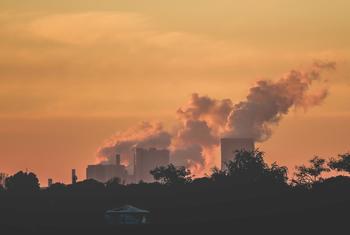 The goal to limit future warming to 1.5 degrees Celsius, highlighted in the Paris Agreement on climate change, and driven home in last November’s COP26, gathering in Glasgow, is now on “life support” and “in intensive care,” the UN chief told the Economist Sustainability Summit on Monday.