“For more than one month now, the entire population of Ukraine has been enduring a living nightmare,” she said. “The lives of millions of people are in upheaval as they are forced to flee their homes or hide in basements and bomb shelters as their cities are pummelled and destroyed.”

🔔#UKRAINE: WFP has reached 1 million people inside the country.While safety is people's number one concern, food is increasingly becoming a worry. The systems have been put in place to deliver food to more than 3 million people in need, but more support is essential.

In a related development, the UN Human Rights Council on Wednesday announced the names of the three investigators who are to carry out the work of the Commission of Inquiry on Ukraine, which the forum voted to establish on 4 March.

They are Erik Møse of Norway, Jasminka Džumhur of Bosnia and Herzegovina and Pablo de Greiff of Colombia.

The panel’s mandate includes investigating all alleged rights violations and abuses committed during Russia’s military attack on Ukraine, along with related crimes.

Nearly five weeks into the conflict, the UN World Food Programme (WFP) said that it has provided emergency assistance to one million people inside Ukraine - no small achievement, considering that the agency had no presence inside the country until a month ago – “no staff, no network of suppliers or partners”.

The agency said on Wednesday that it has also established logistics hubs across the country to provide support to deliver food “at scale” to communities in need.

“Trucks, trains and minivans are today delivering food supplies to the most vulnerable people across the country and more convoys are expected in coming days,” WFP said in a statement.

In total, WFP aims to help three million of the most vulnerable, in a country where more than four in 10 people are worried about finding enough to eat.

To do so, it has appealed for $590 million to assist 3.1 million crisis-affected people, for the next three months.

In Kharkiv, WFP has provided 330,000 loaves of bread to families; in Lviv, people who’ve fled fighting have received cash assistance and ready-to-eat food, which has also been distributed in other parts of the country.

To date, more than four million people have fled Ukraine to neighbouring countries, according to the UN Refugee Agency portal, with 2.3 million now sheltering in Poland and 608,000 in Romania and hundreds of thousands more in Moldova, Hungary, Russia and Slovakia.

Meanwhile, UN Children’s Fund, UNICEF, warned that two million children have now been forced to flee Ukraine, as the war rages on. More than 2.5 million youngsters have been internally displaced inside the country.

“The situation inside Ukraine is spiralling”, said UNICEF Executive Director Catherine Russell. “As the number of children fleeing their homes continues to climb, we must remember that every single one of them needs protection, education, safety and support.”

In her update to the Geneva forum, the UN High Commissioner for Human Rights also told the Human Rights Council, that her Office had verified dozens of incidents in which medical facilities have been damaged, including 50 hospitals.

Where are you from? His reply, ‘I am from Izium, a city that no longer exists'

Echoing calls from the UN Secretary-General for an end to the fighting, Ms. Bachelet insisted that “the hostilities must stop, without delay”.

And in a direct appeal to the Russian Federation, she urged the country’s leaders “to heed the clear and strong calls of the General Assembly and of this Council, and immediately act to withdraw its troops from Ukrainian territory”.

WHO continues to work with local and international partners to deliver medical supplies to the hardest hit areas across Ukraine, and has now delivered 160 metric tonnes of supplies, said the World Health Organization chief, Tedros Adhanom Ghebreyesus, on Wednesday.

“We continue to urge for guarantees of safe passage to deliver supplies to Mariupol and other besieged cities…We are outraged that attacks on healthcare are continuing.

Since the start of the Russian invasion, he said there had now been 82 attacks on healthcare, resulting in at least 72 deaths and 43 injuries, including patients and health workers.

“Attacks on health care are a violation of international humanitarian law, and must stop immediately.”

In many areas across the country, people urgently need medical supplies, food, water, shelter and basic household items,” Ms. Bachelet said, before noting that it is still proving difficult to assess just how many people have been killed in places of constant shelling and intensive fighting, such as Mariupol and Volnovakha.

“Every day, my colleagues are listening to the heartbreaking stories of Ukrainians whose lives have been shattered by this conflict,” she said. “Just last week, they asked a simple question to a displaced man from a town in eastern Ukraine, ‘Where are you from?’ His reply, ‘I am from Izium, a city that no longer exists'". 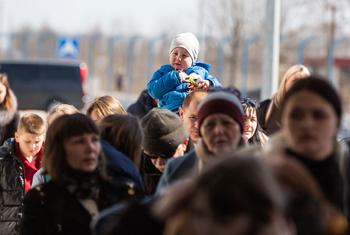 At least 1,100 civilians have been killed in a month of fighting in Ukraine, a senior UN humanitarian official told the Security Council on Tuesday, stressing that the conflict “shows no signs of abating.” 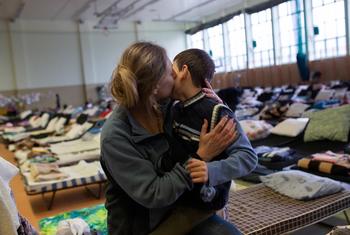 With the number of refugees fleeing Ukraine rapidly approaching four million, the UN refugee agency (UNHCR) and the World Food Programme (WFP) on Wednesday launched a new emergency appeal, with an assist from some top football players who know firsthand what it’s like to flee for your life from a warzone.