Millions of Ukrainians may soon face serious food insecurity because of the ongoing conflict, the UN warned on Tuesday, amid reports that people are facing “life-and-death decisions” on whether to leave Mariupol and elsewhere, more than a month since the Russian invasion.

The alert from the Food and Agriculture Organization (FAO) follows assessments in 19 of Ukraine’s 24 oblasts, or regions, which indicated that it was uncertain that Ukraine could harvest crops, plant new ones or sustain livestock production.

Just crossed the border into #Ukraine to start @IAEAorg's mission to ensure the safety and security of the country’s nuclear facilities. We must act now to help prevent the danger of a nuclear accident. https://t.co/kKHJHIeGYV pic.twitter.com/mB5w7pL7ji

“An immediate and worrying finding is that food shortages are expected immediately or in the next three months in over 40 per cent of the surveyed areas and cases,” said Rein Paulsen, FAO Director, Office of Emergencies and Resilience.

“When it comes to the all-important production of vegetables, conflict is likely to severely disrupt production for tens of thousands of smallholder farmers, those who have decided to stay behind.”

To help support the wider relief effort, FAO has appealed for $50 million but it is only 10 per cent funded.

Nonetheless, it has been possible to support more than 14,600 farming families by providing them with more than 740 tonnes of urgently needed seed for planting, Mr. Paulsen explained.

Meanwhile, in Mariupol and other Ukrainian locations that have been encircled and pummelled by indiscriminate shelling, the International Committee of the Red Cross (ICRC) warned that the crisis was “deepening…the level of death, destruction and suffering that we are witnessing and that is being inflicted on civilians, is abhorrent and unacceptable”.

Briefing journalists in Geneva, ICRC spokesperson Ewan Watson reiterated serious concerns about civilians who have no safe means of escape, and who have faced constant shelling, while also lacking running water and other essentials.

According to UN aid coordinating office, OCHA, around 90 per cent of Mariupol’s residential buildings – some 2,600 homes – have been affected by active fighting.

Some 60 per cent of buildings have suffered various degrees of damage from direct shelling, while about 40 per cent have been completely destroyed. Local authorities say the rising civilian death toll is fast-approaching 5,000 people.

© UNICEF/Vincent Tremeau
In Palanca, Moldova, at the border with Ukraine, a boy rests his head.

“Today civilians are taking life-and-death decisions to flee when there is no ceasefire or other agreements in place that will allow them to leave safely,” said ICRC’s Mr. Watson. “Time is running out for citizens in Mariupol and in other frontline areas who have now gone for weeks with no humanitarian assistance.”

Highlighting the risks faced by medical workers and patients in Ukraine, Dr Jarno Habicht, World Health Organization (WHO) Representative in Ukraine, said that there have now been “74 attacks with 72 deaths and 40 injuries in the period of 24 February until 25 March…These attacks are against hospitals, ambulances.”

Dr Habicht confirmed that medical supplies were “much-needed in the facilities where the doctors and nurses are doing much of the work, almost 24/7, in these very difficult circumstances”. 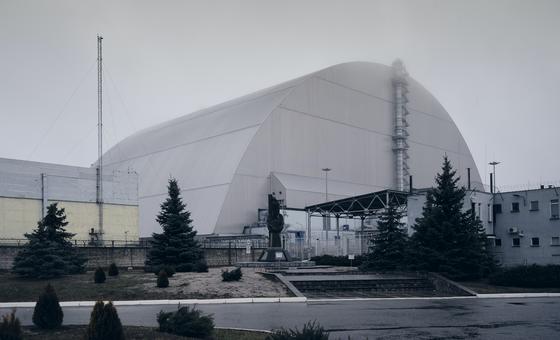 In a related development, the UN’s nuclear watchdog, the IAEA, said on Tuesday that high-level discussions are under way in Ukraine to help avert the risk of a radioactive accident at one of the country’s nuclear power plants.

There have been “several close calls”, said IAEA Director-General Mario Grossi, who is leading meetings with senior Ukrainian government officials to facilitate “prompt safety and security support”, the agency said.

“The military conflict is putting Ukraine’s nuclear power plants and other facilities with radioactive material in unprecedented danger,” Mr. Grossi said. “We must take urgent action to make sure that they can continue to operate safely and securely and reduce the risk of a nuclear accident that could have a severe health and environmental impact both in Ukraine and beyond.”

The Secretary-General António Guterres, spoke on Monday to Mr. Grossi ahead of his mission to Ukraine, and in a statement issued on Tuesday, the UN chief reiterated his "strong support" for all the IAEA's efforts, calling for "safe and unfettered access to all nuclear facilities", for the agency's staff. The Chernobyl plant, was taken over by invading Russian forces last last month.

"Their important work should not be interfered with", said the statement, issued by his Spokesperson. "An accident at a nuclear power plant would be a health and environmental catastrophe. All efforts must be taken to avoid this disastrous outcome."

Mr. Grossi has warned repeatedly about the deteriorating safety and security situation of Ukraine’s nuclear facilities since Russia’s invasion of its neighbour.

In particular, the IAEA chief urged caution after Russian forces took control of the stricken Chernobyl site on 24 February, with a second plant – Zaporizhzhya – coming under Russian control about a week later.

He has stressed the IAEA’s commitment and readiness to help ensure that indispensable safety and security protocols are adhered to. In recent weeks, several of these “pillars” – including the physical integrity of facilities, the ability of operational staff to work without undue pressure, and the access to off-site power – have been seriously compromised, the agency said.

In a statement, the IAEA insisted that it had drawn up detailed plans to provide assistance to Ukraine’s nuclear sites, which include 15 nuclear power reactors at four plants, as well as Chernobyl, where radioactive waste management facilities are located, following the 1986 accident.

Among its proposals, IAEA intends to send experts to “prioritized facilities”, along with monitoring and emergency equipment.

“Ukraine has requested our assistance for safety and security. We will now start delivering it,” said Mr. Grossi. “Ukraine has one of Europe’s largest nuclear power programmes. The IAEA’s presence, where needed to ensure safety and security, is of paramount importance. We are ready to provide the necessary support now.”

© WFP
Bread distribution inside a subway station in Kharkiv, Ukraine.
♦ Receive daily updates directly in your inbox - Subscribe here to a topic.
♦ Download the UN News app for your iOS or Android devices. 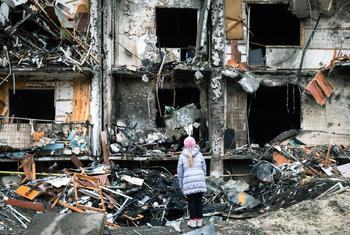 The UN Secretary-General appealed for an immediate humanitarian ceasefire in Ukraine on Monday, so that “serious political negotiations” can advance towards a peace agreement, based on the principles of the United Nations Charter. 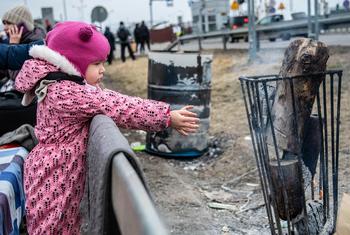 Ongoing violence in Ukraine has left millions of people “in constant fear” of indiscriminate shelling, the UN warned on Friday, as efforts continued to reach the country’s most vulnerable populations, one month on from the Russian invasion.