The United Nations Deputy Secretary-General on Monday called on countries in Asia and the Pacific to speed up the shift from fossil fuels to new, low-carbon development models, in a just and inclusive way.

“Moving away from coal and fossil fuels in a region that accounts for 75 per cent of global coal-fired generation capacity will not be easy. But it is essential for our common future, and it is financially and technologically possible,” Amina Mohammed said.

She also highlighted the need for greater investments in adaptation, and urgent action to build the capacity of developing countries to adapt and build resilience to the impacts of climate change.

“The latest IPCC [Intergovernmental Panel on Climate Change] report laid out an atlas of human suffering – particularly across the Asia-Pacific region, where the very existence of entire nations is threatened by rising sea-levels and where we will see vulnerabilities grow with increased flooding, heat waves, drought and extreme weather events,” Ms. Mohammed added.

The deputy UN chief was addressing the ninth Asia-Pacific Forum on Sustainable Development (APFSD), in Bangkok, where governments and key stakeholders from the private sector, youth and civil society representatives from across the region, met in person and online, against the backdrop of faltering progress towards the Sustainable Development Goals (SDGs). The Forum runs through 31 March.

Over the next four days, Forum participants will undertake an in-depth review of the region’s progress on Sustainable Development Goals 4 (Quality education), 5 (Gender equality), 14 (Life below water), 15 (Life on land) and 17 (Partnerships for the Goals). The outcome of the regional Forum will feed into the global High-Level Political Forum in July.

Estimates suggest that regional GDP growth could slow down and inflation could rise, primarily due to soaring oil and commodity prices, supply-chain disruptions, and fiscal constraints. Debt burden is also feared to rise for emerging and developing countries.

We must drive #SDG progress with urgency, ambition and scale -resounding call from countries & key stakeholders as the #APFSD opened today. I trust this week's Forum & @UNESCAP will continue to serve as the most inclusive platform to promote dialogue, foster joint regional action pic.twitter.com/lu2GPG0Zx3

According to the UN Economic and Social Commission for Asia and the Pacific (ESCAP), the convener of APFSD, the region is “fast losing ground” on its ability to achieve the development goals by 2030 on the black of the COVID-19 pandemic and complex crisis.

Asia-Pacific’s progress on quality education, gender equality, life below water, life on land, and partnerships, the five SDGs under review at the meeting, “has been limited or even stagnated in some cases”, said Armida Salsiah Alisjahbana, Executive Secretary of ESCAP.

“Regrettably, region has even regressed on others, including those on sustainable consumption and production, and climate action,” she added, calling on governments to put policies into action by aligning national recovery strategies with the 2030 Agenda for Sustainable Development.

The head of ESCAP also called for strengthening public and private finance for inclusive and sustainable development, and putting people and planet at the centre.

Karl Kendrick Chua, Secretary of National Economic and Development Authority (NEDA), who was elected as Chair of the ninth APFSD, added that the unique experiences of countries in Asia and the Pacific, “as well as our shared struggles to rise above the challenges posed by the pandemic, are replete with lessons and best practices we can all draw from as we strive to shape a better region in the face of a new reality.”

Monday also marked the seventy-fifth anniversary of ESCAP, the UN’s development arm in Asia and the Pacific.

The Economic Commission for Asia and the Far East, as ESCAP was then called, was established in 1947 in Shanghai, China, as a forum for regional collaboration to help countries focus on economic development and reconstruction in the aftermath of World War II.

In 1976, the Commission changed its name to ESCAP, reflecting its expanded membership and scope of work. Since its establishment, ESCAP has formed institutions key to the continued growth of the region, including the Asian Development Bank, the Asian Highway Network, and the Trans Asian Railway Network, which for instance covers over 117,500 kilometres of railway lines and over two dozen countries.

Marking the occasion, Ms. Alisjahbana highlighted that ESCAP has been the most inclusive platform to promote dialogue and foster joint regional action in Asia and the Pacific.

“Let us recommit to this mission. I count on your continued commitment, support and leadership,” she said.

UNESCAP
ESCAP celebrates 75 years of regional cooperation
♦ Receive daily updates directly in your inbox - Subscribe here to a topic.
♦ Download the UN News app for your iOS or Android devices. 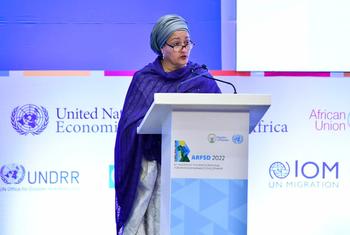 Ending the acute phase of the COVID-19 pandemic and building resilience against the next outbreak will be critical to achieving the Sustainable Development Goals (SDGs), Deputy Secretary-General Amina Mohammed said in remarks to a UN conference that opened in Kigali, Rwanda on Thursday.