UN India/JAS
The Naubat Baja project, conceived by the United Nations Population Fund (UNFPA), is a joint initiative of the Directorate of Women Empowerment, Government of Rajasthan, the Rural Electrification Corporation (REC) Foundation and UNFPA.

With the help of an innovative mobile phone service, UN agencies are working with the Government of Rajasthan, India, to combat child marriage.

The poster shows a tiny girl with braided hair, tied at the end with pink ribbons. Her face droops in despair as she walks next to an older man. The garlands around their necks indicate that they have just been wed.

She holds a little blackboard in her hand, with the first letters of the Hindi alphabet on it, a sign that she would rather be in school.

The next image shows another life for the girl: she is grinning happily, dressed for school, and sitting next to her smiling mother.

The message is simple, but effective: educate your children, stop child marriage.

UN India/JAS
With the help of an innovative mobile phone service, UN agencies are working with the Government and local bodies in Rajasthan to combat child marriage

The little girl in the Naubat Baja poster could well have been Sapna*, a young girl from Jaipur in her early teens. Even though she is still a minor, her family removed her from the classroom, and were preparing to marry her off, when Shreya*, a volunteer with Jeevan Ashram Sansthan (JAS), an NGO that works to empower women and girls, intervened.

Shreya knew about the Naubat Baja mission and had its phone number. In June 2021, she heard that a minor in Jaipur was to be wed to a 30-year-old man.

Sapna’s father had taken a loan from the man’s family. When he could not repay it, the lender – the would-be groom’s father – said he would write off the loan, if Sapna married his son.

Shreya called the helpline, and the police swung into action. The wedding was stopped. Sapna was sent to a shelter for two months, but is now back home and has gone back to the schoolroom. 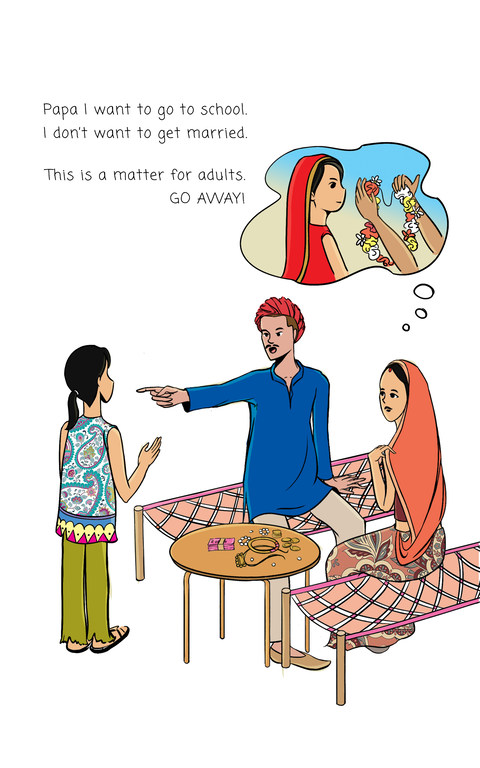 From music to mobiles

The poster is part of campaign by Naubat Baja Missed Call Radio, a cloud telephone-based radio channel in the western Indian state of Rajasthan, that addresses issues of adolescents’ well-being, empowerment and health.

The words Naubat Baja, stand for an ensemble of musical instruments that were played together in earlier times to catch the attention of people. This initiative is a new incarnation for the digital age, relaying messages against harmful practices such as child marriage and gender discrimination.

Launched on International Women’s Day in 2019, Naubat Baja relies largely on the strength of mobile phones, which have penetrated the remotest corners of India. The initiative banks on the fact that the cell phone is the youth’s favourite mode of communication, particularly in areas where people have little access to television, cable, or the internet.

Although child marriage is banned in many Indian states, including Rajasthan. Shreya has witnessed this first-hand in her own family: her two elder sisters, she says, were married off when they were minors.

“I have seen the difficulties they face now because of lack of education. I do not want other girls to fall into this trap,” says Shreya, who escaped her sisters’ fate, and is studying for a post-graduate degree.

In a March 2021 report, the UN Children’s Fund, UNICEF, pointed out that some 100 million girls are at risk of child marriage over the next decade.

In Rajasthan, civil society organisations such as JAS are battling the practice, and succeeding in spreading awareness about its dangers, through innovative programmes such as Naubat Baja.

“Families that find it hard to sustain themselves would rather marry off their girls even if they are not yet of age. It would mean fewer mouths to feed,” says JAS director Radhika Sharma.

Arranging a wedding in pandemic times also means less spending because of restrictions on gatherings and, with people leaving homes and travelling to distant areas in search of work, getting daughters married early, assures parents of their offspring’s safety.

“Parents often feel their girls would be safe if they are married off early”, adds Ms. Sharma. “They would not be abused physically if it is known they are married. Poverty, lack of education, patriarchy and gender inequalities are also important factors behind the practice”.

The aim of the Naubat Baja programme is not only to counter the practice of child marriage, but also to empower girls in other ways.

Girls phone the Naubat Baja number and receive a call back, which contains a 15-minute recording of free entertainment, peppered with Hindi film songs, short stories and audio dramas themed around social issues narrated through comedy or satire.

There is news about job opportunities, general knowledge facts and information about government welfare schemes aimed at the youth.

The regularly updated programme, overseen by UNFPA representatives, is produced in studios with the help of a content team of researchers and presented by professional audio content makers.

Volunteers and adolescent group leaders associated with Naubat Baja are called champions: Shreya is one of them.

In Rajasthan, efforts are on to draw in more partners in the drive against child marriage. Local frontline workers and members of the Nehru Yuva Kendra Sangathan (NYKS) — one of the largest youth networks in the world — are being trained to hold meetings and talks with adolescent girls and families in the community on messages aired by Naubat Baja.

“The initiative is one of the innovative strategies employed by UNFPA and partners involved, to ensure young people are aware of their rights and opportunities, have access to accurate information and services regarding their health and well-being, and are able to participate and contribute to addressing social issues that affect them.”, explains UNFPA India deputy representative, Sriram Haridass.

Once the strategies start to bear fruit, and when there are numerous initiatives such as Naubat Baja engaging and empowering young people like Shreya, thousands of Sapnas will dare to dream.

The Naubat Baja poster against child marriage sums it up well. “I will let my children’s dreams soar,” says the mother next to the happy girl child in school.

A version of this story was published by the UN reproductive rights agency (UNFPA) earlier this month. You can find it here. 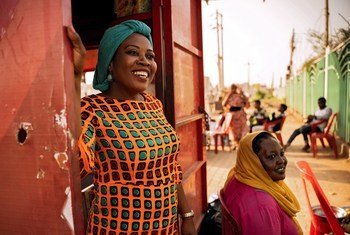 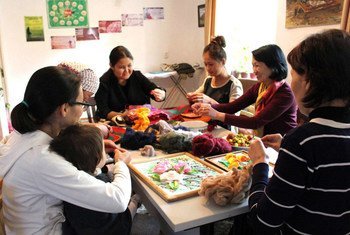 The ongoing fight against child marriage and ‘bride kidnapping’ in Kyrgyzstan

Although child marriage and “bride kidnapping” are illegal in Kyrgyzstan, both practices still exist in parts of the country. An initiative from a UN-backed programme is finally leading to a change in attitudes, and a decline in these harmful practices.