The UN chief on Friday welcomed the declaration of an indefinite humanitarian truce on the part of the Ethiopian Government, and the commitment by forces in the Tigray region to comply with the immediate ceasefire, amid deep concern for the five million people who need emergency aid there.

“The conflict in Ethiopia has caused terrible suffering for millions of people across Afar, Amhara, Tigray, Benishangul Gumz and Oromia”, said UN Spokesperson, Stéphane Dujarric, in a statement issued on behalf of Secretary General António Guterres.

“These positive developments must now translate into immediate improvements on the ground”, the statement continued.

Conflict erupted in Tigray in November 2020 between federal troops and forces loyal to the Tigray People’s Liberation Front (TPLF). The war spilled over into the neighbouring regions of Amhara and Afar, killing thousands of civilians, and displacing millions across northern Ethiopia, and into neighbouring Sudan.

All parties to the conflict are responsible for multiple grave rights abuses, according to UN human rights chief Michelle Bachelet.

The northern region has not received any aid deliveries by road since last December, due to the ongoing fighting. The Ethiopian Government declared the cessation of hostilities on Thursday, saying that it was to allow aid to reach stricken civilians.

Hours later, Tigrayan authorities issued a statement saying that they would do everything possible, to make the humanitarian ceasefire, a success.

Many aid activities remain reduced or suspended in Tigray, UN humanitarians reported last week, when fewer than 7,000 people received food assistance - an extremely small fraction of the 870,000 who UN colleagues are trying to help each week.

Humanitarian partners warn that less than 10 per cent of the required quantity of seeds have managed to make their way Tigray before the start of the planting season, which is only a month away.

© UNICEF/Christine Nesbitt
A child sits inside a vehicle burned out during fighting in the Tigray region of northern Ethiopia.

Some medical and nutrition supplies have continued to be flown into the Tigrayan capital, Mekelle, in recent months, and in neighbouring Afar, an estimated 200,000 men, women and children displaced by the fighting, remain in areas that the UN and partners cannot reach, due to ongoing insecurity issues.

In accessible parts of Afar, more than 112,000 people have received food assistance since late February, the UN reported last week.

Mr. Guterres in his statement, reiterated his call for the restoration of public services in Tigray, “including banking, electricity and telecommunications, and calls for all sides to proactively enable and facilitate the delivery of desperately needed humanitarian assistance across all affected areas.”

The Secretary-General urged all parties fighting in the north, “to build on this encouraging development to take the necessary steps towards a long-term ceasefire.” 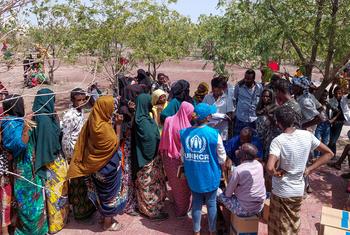 Thousands of Eritrean refugees sheltering at a camp in the Ethiopian Afar region, have fled following a deadly attack on the facility earlier this month, the UN refugee agency, UNHCR, said on Friday. 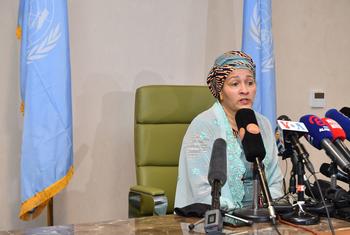 Ethiopia in 'much better place' to resolve Tigray conflict: Mohammed

On the last day of a five-day trip to Ethiopia, the Deputy Secretary-General said the East African nation is in “a much better place” to resolve the conflict that erupted 15 months ago in Tigray.