© UNICEF Moçambique/2021/Ricardo Franco
The crisis in Cabo Delgado is having a worrying impact on children and women, in particular.

“According to partners in the region, a series of attacks by non-State armed groups between January and mid-March displaced some 24,000 people within Nangade district,” UNHCR spokesperson Boris Cheshirkov told journalists at the Palais des Nations in Geneva.

We are alarmed by the ongoing violence in northern Mozambique’s Cabo Delgado province, which has forced thousands to flee since the start of this year. They need urgent humanitarian assistance and protection services. https://t.co/0eLRoAQKVw

With hundreds of families reportedly still on the move, he said that “they need urgent humanitarian assistance and protection services”.

Some 5,000 people have also sought protection in the neighbouring district of Mueda, a remote area bordering Tanzania, after witnessing and suffering atrocities, including “killings and the decapitation and dismemberment of bodies, sexual violence, kidnappings, forced recruitment by armed groups, and torture,” said Mr. Cheshirkov.

“We are also establishing reception and communal facilities for internally displaced people at Lyanda and Nandimba,” he added.

According to local authorities, Mueda district hosts 134,515 internally displaced, making it one of the largest host districts of displaced communities within Cabo Delgado.

The UNHCR spokesperson warned that most sites are overcrowded and will soon reach capacity.

Over 735,000 people have fled their homes since the conflict in Cabo Delgado started in October 2017.

Since the major militants’ offensive against Palma district were launched on 24 March last year, some residents chose to return to their areas of origin.

“UNHCR considers it premature to encourage returns in Cabo Delgado, due to ongoing insecurity in parts of the province,” Mr. Cheshirkov told reporters, stressing the importance of ensuring that returns are “safe, voluntary, conducted with dignity and based on an informed decision, and that basic services are restored in areas of origin”.

UNHCR considers it premature to encourage returns in Cabo Delgado, due to ongoing insecurity – Agency spokesperson

Meanwhile, UNHCR and others are assisting thousands affected by Category 4 Tropical Cyclone Gombe, which made landfall in Nampula province 11 days ago.

The strongest storm to strike Mozambique since Cyclones Idai and Kenneth wreaked havoc in the spring of 2019, Gombe has destroyed homes, flooded farmlands, and forced people to flee in search of safety.

And it hit less than two months after Tropical Storm Ana, on 24 January, which had affected nearly 181,000 people, mostly in Zambezia, Nampula and Tete provinces.

The Gombe storm triggered chaos in Nampula City, as well as in the nearby Maratane refugee settlement, and sites hosting internally displaced people (IDPs) from Cabo Delgado.

More than 380,000 people have been affected in Nampula province alone, according to local authorities, including tens of thousands of displaced people in urgent need of humanitarian assistance.

“UNHCR is mobilizing urgently needed shelter and other essential items from its stockpiles to assist 62,000 refugees, IDPs and host community members,” said the spokesperson.

As of March 2022, UNHCR’s operations in Mozambique were only 11 per cent funded out of a total of $36.7 million required to deliver life-saving assistance.

Every region of the world is experiencing climate hazards with cyclones and other storms becoming more frequent and severe and those with the least means to adapt are hit hardest.

“Floods are stronger, droughts are intensifying, and wildfires are becoming more devastating,” said the UNHCR spokesperson. “Human-induced climate change is accelerating, and already causing dangerous and widespread disruption to nature and people”.

“Over 80 per cent of refugees and internally displaced people come from the most climate-vulnerable countries worldwide,” he added.

© UNHCR/Juliana Ghazi
A Burundian family in front of their house ravaged by Cyclone Gombe, in Maratane refugee settlement, Mozambique.
♦ Receive daily updates directly in your inbox - Subscribe here to a topic.
♦ Download the UN News app for your iOS or Android devices. 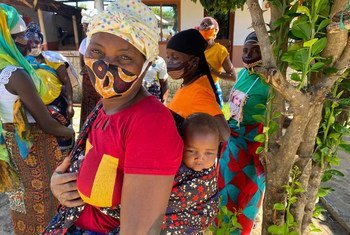 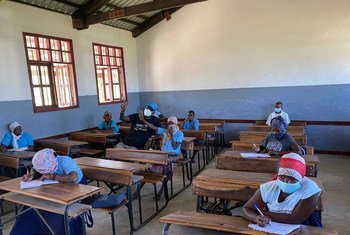 In northern Mozambique, worrying reports emerged on Tuesday that children as young as five have been shown how to handle weapons and indoctrinated to fight with insurgents.