© UNICEF/Oleksandr Ratushniak
A new mother sits in a bed next to her baby in a makeshift maternity ward in a hospital in Kyiv, Ukraine.

The World Health Organisation (WHO) warned on Monday that it is working “day and night” to keep medical supply chains open and preserve the health system in Ukraine, where, it says, medical facilities are stretched to breaking point.

The UN agency’s relief effort continues, despite missile attacks on healthcare facilities, workers, and patients in Ukrainian cities, which have killed 12 people and injured 34. Nurses have had to ventilate patients manually in hospital basements, away from Russian shelling.

“Supply chains have been severely disrupted. Many distributors are not operational, some stockpiles are inaccessible due to military operations, medicine supplies are running low, and hospitals are struggling to provide care to the sick and wounded,” the WHO statement declared.

Some 18 million people in Ukraine are believed to have been affected by the war, including 6.7 million internally displaced.

Fleeing with what they can carry

A key priority of the WHO relief effort is to provide support to the healthcare systems of neighbouring countries, which have taken in some 2.8 million people in the last two weeks.

One of those countries is Moldova, which has seen over 310,000 people enter its territory since the Russian invasion of Ukraine began.

Natalia Kanem, the head of the UN sexual and reproductive health agency (UNFPA), has visited facilities such as the Moldexpo International Exhibition Centre, and the Manej Sports Arena in the Moldovan capital Chișinău, which have both been transformed into refugee shelters.

“I’ve spoken to women who had to flee for their lives with just what they could carry,” Dr. Kanem said in an interview. “One of them, in tears, explained how she had to leave her three-year-old boy behind. It’s been a harrowing journey for these women. The fear in their eyes is unforgettable.”

Volunteers from UNFPA-supported youth centres have distributed some 6,000 dignity kits with menstrual and hygiene product and are referring pregnant women to medical care units, as well as providing guidance on staying safe in transit. The agency is also working to distribute cash assistance, and establish women and girls’ safe spaces and mobile clinics.

“Humanitarian needs are growing by the hour, and while the situation is still unfolding, it is clear that the war will deepen vulnerabilities and inequalities across the region and beyond,” said Dr. Kanem. “We will do whatever it takes to make sure that women affected by the war, in Ukraine and in neighbouring countries, can give birth safely and live free from violence.”

Speaking to the press on Monday, UN Secretary-General António Guterres called for international humanitarian law to be respected in Ukraine, amid reports that a convoy of some 160 civilian cars has managed to leave the city of Mariupol, which has been surrounded by Russian forces for over two weeks.

According to local officials, the convoy was evacuated under the cover of a “humanitarian corridor”, which would make it the first such ceasefire to be successfully organized between the warring parties.

Conditions in Mariupol have severely deteriorated since the siege began. On Sunday, a statement released by the International Committee of the Red Cross (ICRC), described scenes of immense human suffering in the city, with basic necessities such as food, water and medicine almost exhausted, people of all ages sheltering in unheated basements, and dead bodies lying in the open where they fell.

Mr. Guterres said that the UN and humanitarian partners are working to ensure passage from besieged areas and provide aid, where security permits. Despite the positive reports that some civilians are managing to leave Mariupol, Mr. Guterres emphasized that avenues in and out of encircled cities are more precarious by the day, and called for international humanitarian law to be respected.

© UNICEF/Oleksandr Ratushniak
Shelling killed six-year-old Milana's mother. She is now recovering after surgery at a children's hospital in Kyiv, Ukraine.

The Secretary-General also announced that the United Nations will allocate $40 million from the Central Emergency Response Fund (CERF) in order to “ramp up vital assistance to reach the most vulnerable” adding that the funding will “help get critical supplies of food, water, medicines, and other lifesaving aid into the country, as well as provide cash assistance.”

This is the second allocation from the fund since the rapid increase in hostilities in Ukraine. A $20 million injection of funds was announced on 24 February, and a humanitarian system-wide scale-up to ease the suffering of the people of Ukraine has been launched.

A Flash Appeal for Ukraine was launched on 1 March in Geneva. It requires $1.1 billion in immediate funding to support 6 million of the most vulnerable people in Ukraine. As of Monday, donors have reported $219 million in funding for the appeal.

Private sector donors have also contributed some $200 million to a separate appeal from the UN refugee agency (UNHCR), to help families displaced by the fighting in Ukraine.

UNHCR has asked for $510 million in donations, to provide initial emergency assistance to those displaced inside the country and for refugees throughout the region. As more people flee every day and are increasingly in need of urgent humanitarian support, UNHCR’s funding requirements are also likely to grow.

Electricity has been restored to the site of the defunct Chernobyl nuclear reactor, after power was lost following the site’s occupation by Russian forces on 24 February, the UN atomic energy agency, IAEA, said on Sunday.

IAEA Director-General Rafael Grossi explained that there had not been any critical impact on safety, as Chernobyl’s spent fuel rods are being cooled by the existing water tanks.

But Mr. Grossi said that he was still “gravely concerned about safety and security at Chernobyl and Ukraine’s other nuclear facilities”.

At the Zaporizhzhya nuclear power plant, which has under Russian control since 4 March, the IAEA chief said that Ukrainian technicians had been joined by Russian representatives, contravening safety directives.

© IAEA/Dana Sacchetti
The damaged unit 4 reactor and shelter at Chernobyl, Ukraine.
♦ Receive daily updates directly in your inbox - Subscribe here to a topic.
♦ Download the UN News app for your iOS or Android devices. 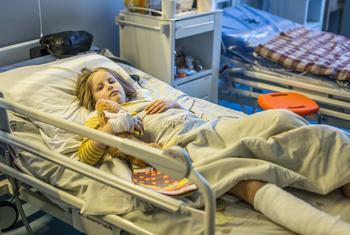 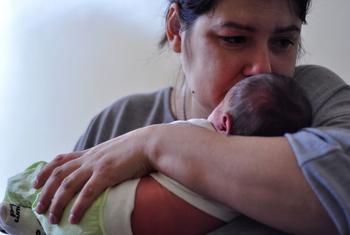 To attack babies is ‘an act of unconscionable cruelty’: UN top officials urge end to attacks on health care in Ukraine

Since Russia invaded Ukraine, 31 attacks on health care have been documented by the World Health Organization. These incidents have killed and injured civilians, as well as destroyed facilities and ambulances, disrupting access to essential health services.